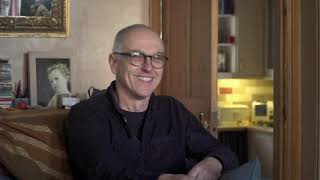 30 years after the release of Talk Talk’s fourth album Spirit of Eden, superfan of the 1980s British art-rock band - Belgian director Gwenaël Breës - found himself crisscrossing the country in an attempt to unravel the mystery surrounding the record.

The problem? Up to his death in 2019 lead singer Mark Hollis notoriously declined all interview requests and the rest of the band has followed suit, refusing to allow their music to be used on film. Armed with a boom mic, Breës must attempt the impossible - to make a film about a band that does not want to be filmed, and tell the story of the ultimate art rock album without playing the record.

His journey becomes an organic quest with silence as a horizon line and punk as a philosophy, as he contends, despite all obstacles, that music is accessible to all and the human spirit is above technique.

Doc'n Roll 2022 Season We're delighted to welcome Doc'n Roll back to Bristol with a selection of engaging music documentaries.  Find out more
In My Own Time: A Portrait of Karen Dalton Thu 26 May 20:20 Since most photographs and film footage of Karen Dalton have been lost or destroyed, this long-awaited film draws on her recordings, and interviews with loved ones and collaborators, to build a rich portrait of a singularly gifted musician  Find out more
Love In Bright Landscapes: The Story of David McComb of The Triffids Sat 28 May 18:00 Love in Bright Landscapes reveals the man behind the songs – via beautifully restored 35mm slides, delightfully evocative home movies and heart-rending interviewees with colleagues, family, and friends.  Find out more