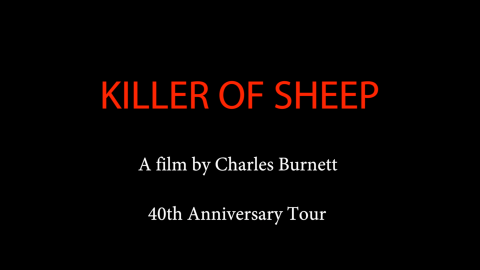 Not only was Burnett the first visible African American independent filmmaker, but Killer of Sheep attempted to depict the everyday lives of average blue-collar black Americans in south-central Los Angeles, subject matter unexplored in independent film until then.

Stan works in a slaughterhouse. It is work that is alienating him from his family and desensitising him to relationships in the wider world. Yet he continues to get up each day and go to work because he can’t see any other alternatives...

As part of this screening we are also presenting the short film The Horse: A young boy keeps a horse company during its last moments of life in Charles Burnett’s spare, lyrical student film, which poignantly contrasts the callousness of adults with the empathy of children.

With thanks to Milestone Films and Kino Lorber.

bell hooks: Reel to Real Season Inspired by her trailblazing collection of essays and interviews Reel to Real, we revisit some of the films and makers focusing on the image makers that moved and provoked bell hooks.  Find out more
Cinema Rediscovered 2022 Wed 20 – Sun 24 July Celebrate the return of the big screen experience at the 6th edition of Cinema Rediscovered (Wed 20 – Sun 24 July), Watershed’s annual festival showcasing brand new restorations, contemporary classics and film print rarities from around the globe  Find out more