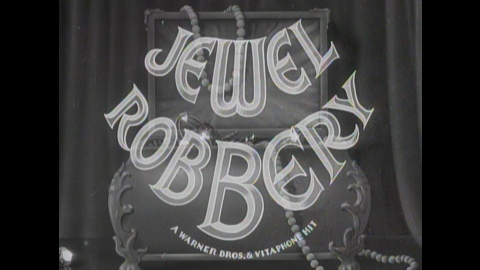 “In the morning, a cocktail. In the afternoon, a man.”

One of the rare Pre-Code films set in Europe, Jewel Robbery is the story of a Viennese lady (the mischievous Kay Francis) caught in the midst of a diabolical jewel heist by a gentleman thief, played by the ever-charming William Powell. Casually wreathing its characters in marijuana smoke and unabashedly mentioning their extramarital affairs, the Warner Brothers tagline for the film teased: ‘He stole her jewels….but that’s not all!’

Francis, terminally bored by her older, wealthy husband, gets a rapturous glint in her eye at the thought of a scandal, never mind the dangerous flirtation with Powell that ensues. At a bite-sized 70 minutes, this heist caper is the kind of sultry amuse-bouche that leaves you wanting more in the best way.

Words by season co-curators Pamela Hutchinson and Christina Newland. With thanks to Park Circus and Warner Bros.

Christina Newland is the lead film critic at the i paper and a journalist on film, pop culture, and boxing at Criterion, Sight & Sound, BBC, MUBI, Empire, and others. She runs an award-winning newsletter, Sisters Under the Mink, on the depiction of women in crime film and TV. Her first book, an anthology entitled She Found it at the Movies: Women Writers on Sex, Desire and Cinema, was published by Red Press in 2020. She tweets at @christinalefou.