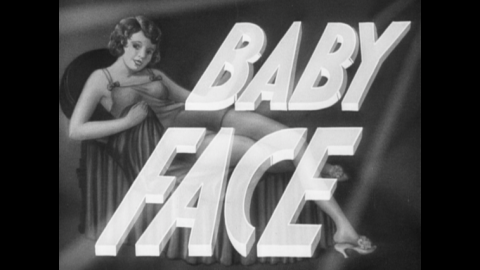 Pre-Code cinema was often a dangerous game of one-upmanship. Warner Bros took one look at MGM’s highly risqué Red-Headed Woman and decided to respond with this jaw-dropping sensation marketed with the tagline “She had it and made it pay”.

She is Barbara Stanwyck, in a steely early role as single-minded young Lily Powers, sexually exploited from a young age and determined both to turn the tables on men, and to use her feminine charms to create a better life for herself.

Inspired by some words from Nietzsche she hops a train to New York with Chico (Theresa Harris) to embark on a career as a ruthless seductress. In the big city, she starts sleeping her way to the top of a bank run by a notorious playboy played by George Brent...

Words by season co-curator Pamela Hutchinson. With thanks to Park Circus and Warner Bros.

Pamela Hutchinson is a freelance writer, critic, film historian and curator. She writes for Sight and Sound, Criterion, Indicator, the Guardian and Empire and regularly appears on BBC radio. She is also the editor of Sight and Sound’s Weekly Film Bulletin, an email newsletter. Her publications include the BFI Film Classic on Pandora's Box and 30-Second Cinema (Ivy Press), as well as essays in several edited collections. In 2021 she delivered the Philip French Memorial Lecture at Cinema Rediscovered. Her site SilentLondon.co.uk is devoted to silent cinema.