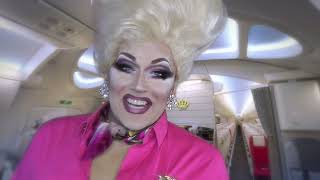 For 18 years by day Ed Popil worked as a telemarketer in Rochester, New York and by night, he transformed into drag queen Mrs. Kasha Davis, a 1960's era housewife trying to liberate herself from domestic toil through performing at night in secret - all in homage to Ed's mother.

After seven years of auditioning to compete on RuPaul's Drag Race, Popil was finally cast on the TV show and thrust into a full-time entertainment career at the age of 44.

Workhorse Queen explores the complexities of reality television's impact on queer performance culture by focusing on the growing divide between members of a small town drag community - those who have been on television, and those who have not.

Queer Vision 2022 Season Queer Vision Film Festival (Fri 24 June - Sun 10 July), presented by Bristol Pride is bigger than ever this year - continuing to bring you a diverse programme of new release LGBT+ films from around the globe, including independently-made features and award-winning short films.  Find out more