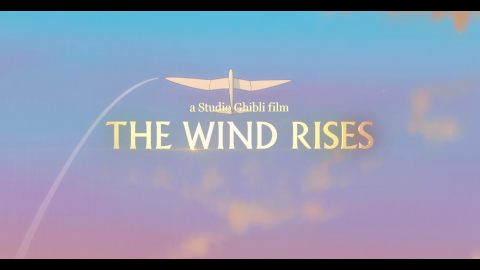 A loving farewell to the career of Jiro Horikoshi, the man behind the design of the Japanese fighter plane during World War II, in this Oscar® nominated feature from Studio Ghibli, 73-year-old Hayao Miyazaki's final film.

Young Jiro Horikoshi (Hideaki Anno) is a bespectacled boy who has fantastical dreams of flying airplanes, but when he learns he's unable to fulfil his dream to become a pilot due to poor eyesight, he decides instead to become an aircraft designer.

The Wind Rises is a breathtaking ode to what is and what could be, chronicling a young man's life through key historical events including the Great Kanto Earthquake of 1923, the Great Depression, the tuberculosis epidemic and Japan's plunge into war.

"Humanity dreams of flight, but the dream is cursed. Aircraft are destined to become tools for slaughter and destruction."

Studio Ghibli Summer Season Fresh for the Summer Holidays, we are excited to be screening this incredible collection of Studio Ghibli masterpieces.  Find out more
The Tale of Princess Kaguya Fri 19 - Thu 25 Aug A tiny nymph found inside a bamboo stalk grows into a beautiful and desirable young woman, who orders her suitors to prove their love by completing a series of near-impossible tasks.  Find out more
The Red Turtle Fri 26 - Sun 28 Aug A man washes ashore on a remote island, a mysterious red turtle prevents his escape, and out of nature's enchanted cycle, a unique bond blossoms.  Find out more