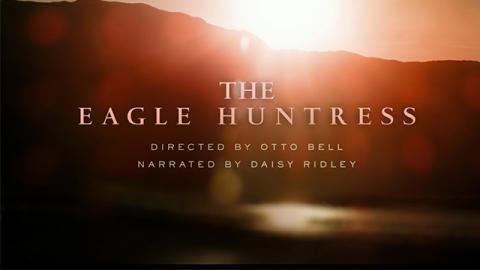 Step aside, Katniss! Make room for Aisholpan, a 13-year-old nomadic Mongolian girl who causes a stir in her tribe by embracing the traditionally male role of Eagle Hunter.

For 2,000 years, the Kazakh people of Western Mongolia have practiced a tradition of hunting with golden eagles, whose wingspan can reach up to 7.5 feet wide. Rather than conforming to traditional female roles, young Aisholpan is determined to follow in her father's footsteps as an Eagle Hunter, providing for her family and competing in the all-male Golden Eagle Festival. So under the support of her father and grandfather (and very few others), Aisholpan must learn all the aspects of falconry to compete and - hopefully - gain acceptance.

With a remarkable, empowered heroine at its heart, absolutely stunning cinematography and narration from another cinematic heroine (Star Wars' Daisy Ridley, who also executive produces), this is a great story about overcoming odds - and a look at one of the world's last true wildernesses...

Age Guidance: The Eagle Huntress is rated a U by the British Board of Film Classification. Find out more information about certificates and the film (including explanations as to why it received a particular age rating) here.

Queen of Katwe Please note: This was screened in Dec 2016 Based on the powerful true story of one Ugandan girl's journey from poverty to becoming a world chess champion, Queen of Katwe is a thrilling tale of hope and discovery that you should definitely make a move for.  Find out more Long Way North Please note: This was screened in Dec 2016 This enchanting animated adventure (from the makers of The Secret of Kells and Song of the Sea) centres on a feisty young girl who embarks on an epic journey to the North Pole in search of her missing grandfather.  Find out more Cosy Corner Book Den Please note: This event took place in Dec 2016 Head on over to our relaxed festive reading/chill out space in the Café/Bar anytime between Fri 16 Dec and Thu 5 Jan* to find comfy seats, loads of books with strong female focus, and free activities.  Find out more