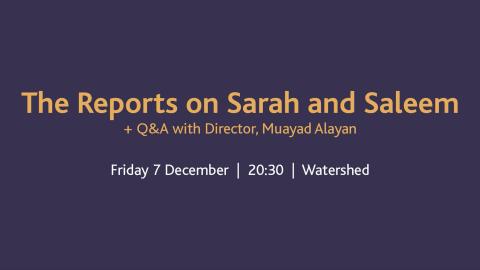 The extra-marital affair between a Palestinian man and an Israeli woman has political consequences in this taut psychosocial drama.

Sarah is Israeli and runs a café in West Jerusalem. Saleem is Palestinian from East Jerusalem and works as a deliveryman. Despite being worlds apart, Sarah and Saleem risk everything as they embark on an illicit affair that could tear apart their unsuspecting families.

When a risky late-night tryst goes awry and threatens to expose them, the two of them look on helplessly as their frantic efforts to salvage what’s left of their lives further escalates things. Caught up in the occupation machinery and socio-political pressure, Sarah and Saleem find themselves trapped in a web of deceit - and not even the truth looks able to stop it.

Followed by a Q&A with Director Muayad Alayan

Against the Odds: building Palestine's film industry under occupation Article by Aphra Evans Modern-day Palestine is scarcely a place where you would expect to find a burgeoning film industry and yet, somehow, despite the occupation, politics, and resulting lack of resources, Palestinian film is blossoming, journalist and filmmaker Aphra Evans writes.  Find out more