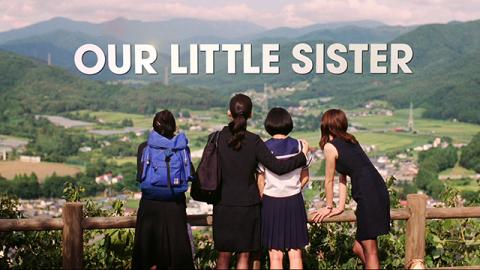 "I watched this film three times and then immediately booked a flight to Japan. I want to live inside this film."
Tara Judah, Watershed Cinema Producer

An exquisitely nuanced family drama, Our Little Sister is Hirokazu Kore-eda’s heartfelt tale of a trio of adult sisters who take into their care the teenage half-sister they never knew they had following the passing of their absent father.

Ever since their parents' divorce - their mother having moved away shortly after her husband left her for another woman - the three Koda sisters (Sachi, Yoshino and Chika) have been on their own. Now in their twenties, the sisters still live together in a sleepy seaside town in the house that once belonged to their grandmother. But when the news reaches them about the death of the father who had long since abandoned them, their lives are thrown into disarray. At the funeral they discover Suzu, their teenage half-sister, and offer to take her in and we experience their developing relationship over the course of the changing seasons.

Touching on themes of stolen childhood and genetic inheritance but also brimming with small moments of grace, this is an intimate, warm embrace of a film. And with this nuanced portrait of a family learning to cope with the past by creating a new future for themselves, Our Little Sister is one of Koreeda’s loveliest and most exquisite films – one full of quiet joys and simple pleasures.