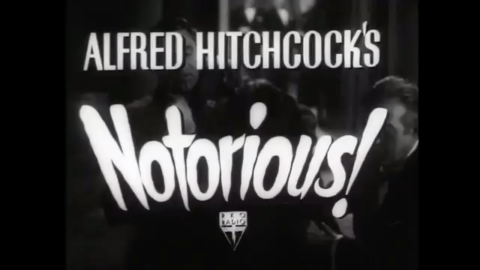 Two of the most iconic and powerful stars of their day pair up in Hitchcock’s post-war spy thriller, film noir – with just a dash of screwball dialogue and some serious romance – and the results are electric. Ingrid Bergman and Cary Grant star as Alicia and Devlin; a woman whose father was a convicted Nazi spy, and who hopes to make reparations for his crimes against the US by engaging in espionage herself, at the behest of a handsome government agent who also just so happens to be falling in love with her. Her mission is to seduce a Nazi conspirator named Alexander (Claude Rains), but things get complicated when he too falls head over heels.

One of Hitchcock’s most critically acclaimed films for both its romantic as well as narrative maturity, Notorious is a defining notch on his well earnt strapline as the master of suspense. An official selection of the 1946 Cannes Film Festival, Notorious was one of the biggest US film releases of that year and has become infamous for its clever evasion of the Motion Picture Production Code’s restriction on screen kissing. Limited in Hollywood to three seconds at the time, Hitchcock had the characters pull away every three seconds, nuzzling each other only to resume kissing, for a total of two-and-a-half-minutes.

A big screen classic with all the ingredients of a great and enduring romantic noir, beautifully restored in 4K ahead of its release by the BFI across the UK on 9 August and BFI Southbank’s Cary Grant retrospective which runs in London throughout August and September. This event is presented in partnership with Bristol's biennial Cary Comes Home Festival.

Buy a Cinema Rediscovered Festival Pass: (this allows you to select from 30+ Cinema Rediscovered screening/events between Thu 25 - Sun 28 July - including Notorious - subject to availability, conditions apply). Pass prices: £95.00 full / £65.00 concessions and under 24s.