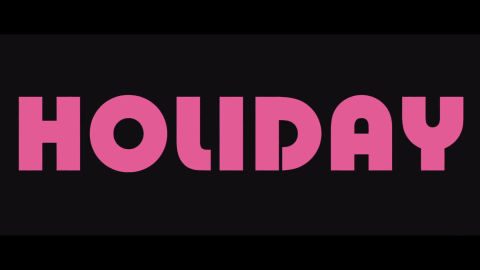 Writer/director Isabella Eklöf makes a powerful debut with this unforgettable and uncompromisingly tough tale about the dark side of a summer vacation - and the brutal experience of young womanhood.

A Danish gangster takes his new girlfriend Sascha (Victoria Carmen Sonne) on an extended criminal family luxury holiday on the Turkish Riveria. Physical and psychological violence are a way of life for this crowd, but when the velvet veneer is stripped raw to the bone, Sascha’s eye drifts towards the ‘normal’ life she is leaving behind - and when she attracts the attention of another man, is challenged her boyfriend's authority in ways that cannot end well...

Contrary to the title, Holiday is a challenging film to watch (there are scenes of assault, sexual humiliation and a rape scene that has been described as "one of the more explicit and brutal rape scenes in recent memory") but it's a necessary, furious look at misogyny and brutality. Sascha is one of the most thrilling characters to appear in cinema in 2019 - and director Eklöf one of its brightest new talents.

Warning: This film contains sequences of flashing lights which may affect viewers with photosensitive epilepsy.

“Like a child, I have to poke at what’s forbidden” Violence and Consumerism in Isabella Eklöf’s Holiday Article by Thea Berry Isabella Eklöf’s directorial debut caused more than a stir on the festival circuit in 2018 due to the frank portrayals of violence. Rather than being viewed as gratuitous - a word so often associated with on-screen violence - Eklöf is demanding the audience connect with what they already know but choose to ignore, writes Watershed Cinema Producer, Thea Berry.  Find out more