Information is everywhere. We can’t seem to get away from it. We are subjected to a constant tidal wave of news and the more we are exposed to it the more we chose to ignore. Obviously, we can’t read every article, watch every video or listen to every podcast, so we are happy with cherry picking headlines which we can bring up in conversation just to give everyone else the impression that we are politically engaged. Ignoring just enough of the details just so that we can keep shopping at Amazon guilt-free! Isabella Eklöf’s daring debut feature, Holiday, is demanding that we do exactly the opposite. She is forcing the audience to face to what they most likely already know.

Holiday tells the tale of Sascha (Victoria Carmen Sonne), who is on a luxury holiday with her small-time drug lord boyfriend Michael (Lai Yde) and the rest of the ‘family’ on the Turkish Riviera. Michael wears expensive suits, expensive watches and eats at expensive restaurants. His status is supported by his material possessions. No doubt Sascha is another possession. A young beautiful trophy. It’s evident that Eklöf is commenting directly on the male gaze and its nature to possess that which it beholds. Yet, on another level she using it as a vehicle to discuss the capitalist gaze and its nature to consume and conquer.

Eklöf balances the morally ambiguous relationship between the consumer and consumer product through the film’s visual juxtapositions. Beautifully shot by Nadim Carlsen (Border, 2018), the bright pastel and neon colours contradict the film’s dark subject matter. The familiar and welcoming colour palette creates a certain amount of comfort for the audience; lulling us into a false sense of security and making scenes of violence all the more jarring.

We are initially made to feel at ease, not just because the film is aesthetically beautiful but because it is familiar. The glitz and glam make it feel like an Instagram post; the bright lighting and stark white surfaces make it feel like a high street clothing store or a high-end boutique. It mirrors the system of capitalism which runs our society, and which is constantly telling us to buy more, to consume more at the expense of those being exploited.

It is no coincidence that the film opens with Sascha shoe shopping in an expensive boutique reflecting her attitude to the consumer market. Whether it’s material goods or drugs, Sascha leads a life guided by her wilful ignorance. She is staying in a beautiful villa in a stunning location yet seems indifferent to the fact that it has been funded by her boyfriend’s drug dealing; a trade which runs on exploitation and violence. 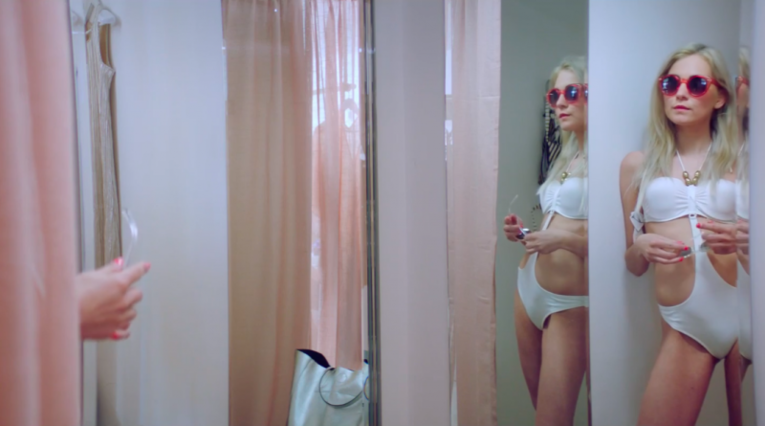 While Holiday is most definitely an engrossing watch it is undoubtedly challenging viewing. There are scenes of assault, sexual humiliation and a rape scene that has been described as "one of the more explicit and brutal rape scenes in recent memory", probably since Gaspar Noe’s Irreversible (2002). In response to this, Eklöf has said:

“Concerning the violence, this is very much about what the core of the #MeToo-movement is about. We have to open our eyes wide to what is going on for a lot of people and not dismiss it as a female issue, (that’s only 50% of everyone) or something too scary, vulgar or unappetising to speak about.”

It is undeniable that this film will provoke some strong reactions from audiences - and so it should. However, it is vital to stress that while this scene is disturbing and painful to watch, it is a carefully considered scene with a powerful message behind it. Forcing the viewer to connect with deeply uncomfortable issues. Here, Eklöf is simultaneously calling out our apathy and our sensitivity. Asking the audience to pay attention. Making us ask ourselves whether our silence damages our moral compass. Does our silence make us complicit?

Holiday does not answer the question it poses. Its purpose is to forcibly bring a conversation that goes on behind closed doors out into the open. Rather than try before you buy, we’re being asked to take a long, hard look in the mirror.