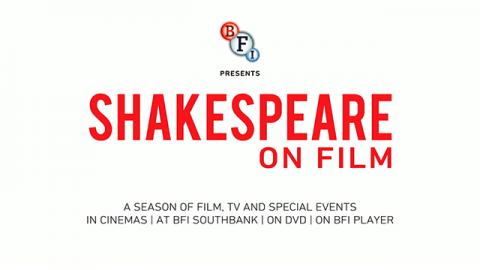 William Shakespeare died 400 years ago, yet has inspired more films than any other writer. His influence on cinema has been profound, and in turn cinema has wholly transformed access to his work.

In addition to the Sunday Brunch screenings we also have a rare screening of 1917 silent film Amleto (Thu 23 June 18:00) with a live accompaniment and introduction by Film Historian Luke McKernan, presented in partnership with South West Silents. And in May we play host to a special screening of Henry V (Fri 27 May 18:15) followed by a satellite Q&A with one of Northern Ireland’s most acclaimed talents Kenneth Branagh broadcast live from Belfast’s Queen’s Film Theatre. Let's step once more into the breach, dear friends.

Explore Shakespeare in Bristol this summer with us and Bristol Shakespeare Festival - how many famous Bristol locations can you spot in this video?

In collaboration with Bristol Shakespeare Festival.

Classified 12A  S   Shakespeare on Film
Please note: This was screened in June 2016
Film
Akira Kurosawa's famous interpretation of Shakespeare’s King Lear as a jidaigeki epic was at the time of its release the most expensive Japanese film ever produced and remains an undoubted masterpiece of world cinema.
Read more Ran

Classified U  Shakespeare on Film
Please note: This was screened in June 2016
Film
The 1917 silent film Amleto (The Italian name for Hamlet) is regarded as one of the best Shakespeare films. Don’t miss this very rare screening of one of the cinema’s most celebrated adaptations of one Shakespeare most vital plays - with live piano accompaniment by composer Neil Brand, followed by a Q&A with film historian Luke McKernan.
Read more Amleto with Live Score + Q&A

Classified 15  Shakespeare on Film
Please note: This was screened in June 2016
Film
Brooding and darkly laden with symbolic imagery, Derek Jarman’s terrific, homoerotic adaptation of Shakespeare’s final play is considered by some to be the most evocative Shakespeare adaptation ever to reach the screen.
Read more The Tempest

Classified 15  Shakespeare on Film
Please note: This was screened in June 2016
Film
A must-see for fans of both the Bard and this thrillingly bold director, Roman Polanksi’s first film following the murder of his wife Sharon Tate was an atmospheric and gripping tale of ruthless ambition and inner turmoil that is among the most stark and authentic of all Shakespeare films.
Read more Macbeth

Classified PG  Shakespeare on Film
Please note: This event took place in May 2016
Event
Kenneth Branagh will discuss (live via Satellite from Belfast) his life and work in the context of his Shakespeare films with Adrian Wootton, followed by a screening of his award-winning adaptation of Henry V.
Read more Kenneth Branagh Satellite Q&A + Henry V