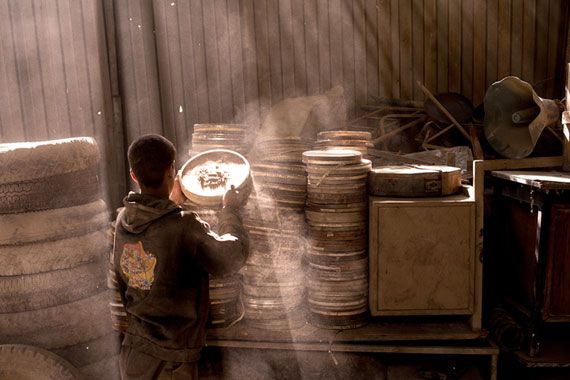 As Afghanistan teeters on an unpredictable future, A Flickering Truth unwraps the world of three dreamers, the dust of a hundred years of war and the restoration of 8000 hours of film archive.

The film’s New Zealand director Pietra Brettkelly spoke to Cinema Rediscovered’s Rosie Taylor about the extraordinary Afghan National Film Archive, the Afghan people and culture, and of course the films.

RT: How did you come across the story of this archive in Afghanistan?

PB: I was in Afghanistan in 2006 making a different film and I knew it was a country I wanted to come back to. I went back in 2012 and I’d heard of this slightly mythical place where the films of Afghanistan are stored. Everybody said ‘You won’t be able to get in there’. It’s [the archive] on one of the most heavily guarded streets in the world. But I’m a very determined kind of person. The guards [at the archive] said ‘No no, you can’t come in’. I appealed. Eventually someone else invited us in to meet the new [Archive] director [Ibrahim] Arify, who is the main character in the film and he said ‘Lets discover the archive together’. I was just really lucky to get there at the right time. I just started filming. I went back to Afghanistan seven times over two and half years. I followed the process for quite some time.

RT: What made you decide to make the film?

PB: If I see characters and an interesting setting and I know I want to spend some time in them I take a leap of faith. I didn’t want to make a war film, but there was something about this microcosm of life inside the archive and all of these films that were sort of living in the dust and the air. And I just thought this could be a really interesting film.

RT: The way in which you used archive film within A Flickering Truth really shows its importance and its power in changing perspectives. It showed a side and a past to Afghanistan that we just don’t see in the West. How did you choose the films to show?

PB: To some degree it was literally what was found and what we had access to. They are still finding films now. I knew I couldn’t carry on filming for years and years, so I had to work with the materials as they came up. While I wanted to give a bit of an overview of the last hundred years of history so people could understand how Afghanistan has arrived at the place it is today, and therefore the context of the people who I was profiling and the context of their lives, I also wanted to show that filmmakers had shown quite a different existence in Afghanistan over the last one hundred years. Arify’s whole position was that he wanted to save the films to show them to people so that the Afghan people understood who they had been in the past and could be again in the future. So these films show a different kind of life and a different kind of existence for people. A place that once had a future for people and education for women and tolerance.

RT: Do you think the films in the archive have the power to change perspectivesof Afghanistan to the outside world?

PB: I would love for those films to screen in other places. You see the clips in my film and some of them are funny, some are entertaining and some are enlightening. They show the breadth of story-telling just like in any culture. If audiences see them then they will hopefully appreciate the culture even more. It’s not all fighting and it’s not all death and it’s not all extremism at all.

RT: What do you want audiences to take away from your film?

The main thing is to appreciate and understand the people of Afghanistan and to perhaps empathise with them and to have a more rounded view of this extraordinary people who have this amazingly rich culture and history. But because of situations, some of which are out of their control, they are in a situation now where they are just struggling to be in their country. I’d like audiences to appreciate them as people and not as some feared ‘Others’.

A Flickering Truth screens at Cinema Rediscovered on July 30th at 13.40pm with a live Skye Q&A with Director Pietra Brettkelly.