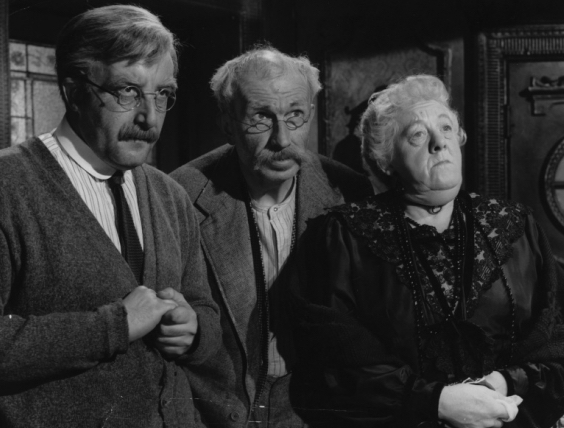 A young married couple inherit a surprise legacy from an unknown distant relative. But with the cinema they receive come challenges, and responsibility...

At the time, this must have been seen as a reasonably slight, mainstream, Ealing-esque comedy. Ealing itself was in its death throes; the studios sold to the BBC, the brand lingering on at MGM Borehamwood, but, with its glory days and most beloved films behind it. The Smallest Show On Earth is firmly in the Ealing thematic tradition, established before the War with films like Cheer Boys Cheer (1939), and continued with greater renown after it, with films like The Maggie (also titled High and Dry, 1954), The Titfield Thunderbolt (1953), The Lavender Hill Mob (1951). Each features the small time, personal, model business enterprise versus an ethically dubious, impersonal, profit-led business giant and/or the forces of unthinking law and order. No surprise, then, that the production credits list a number of Ealing refugees; story and script by William Rose (Genevieve, 1953, The Ladykillers, 1955) and direction by Basil Dearden (Dead of Night, 1945 and The Blue Lamp, 1950) and of course cinematography by Douglas Slocombe.

The film stars the hot couple of British cinema at the time, Bill Travers and Virginia McKenna, as the initially reluctant owners of the Bijou Kinema. But it’s the trio of scene-stealers that you remember from the film, the guardians of the Kinema's soul; Bernard Miles, as the ancient janitor Old Tom, Peter Sellers as the veteran projectionist, Percy Quill (both wearing aged make-up), and the wonderful Margaret Rutherford as Mrs Fazackalee, the ticket lady. Three mighty character actors, at the height of their powers, and it becomes their film.

In reserve we get Leslie Phillips as the 'and Son' of the local solicitors, Sid James and the fearsome Francis De Wolff as Hardcastle, the rapacious owner of The Grand. Up against that lot, Travers and McKenna do well to get noticed at all but, they do, as they learn about the Kinema, its denizens, and themselves in the process.

Contemporarily the film seems far more like a love letter to cinema; to its occasional absurdities and the technical glitches that can be more entertaining than dreadful B-westerns (the staple diet at The Bijou). It’s also a nod to its potential- the transport of delights that flickering images on a big screen can provide, however old the film.

The films we see at The Bijou are, for the most part, a mixture of genuine ‘30s and ‘40s B-Western stock footage with specially filmed inserts, such as Peter Copley and Mario Fabrizi crawling into a desert waterhole, while ice-cream sellers lurk in the foyer. Meanwhile, in an aisle seat near the exit, behind a watchful Bill Travers, fanning herself with a programme, sits a middle-aged lady with distinct, strong features. She only appears in that one shot, amongst a crowd of artists. Her name is Alma Taylor.

The key moment in this film, for me at least, comes immediately after. Returning to their Kinema flat after a night out, the Spensers hear ghostly piano music coming from the auditorium. The spirit of cinema itself, perhaps? A quiet, tender and moving oasis in an otherwise fast-moving comedy, the music comes from a very different film on the Bijou screen: Comin Thro' The Rye (1923), an early British feature from the pioneering filmmaker Cecil M. Hepworth (Rescued By Rover, 1905). Unlike any other film seen at the Bijou, within The Smallest Show, this old silent film is both treated with total respect by the filmmakers: shown at the correct speed, and not a vehicle for comedy, and recieved with reverence, almost rapture by the film's characters. They're moved, and so are we, by this then-ignored piece of cinema history. A beautiful sequence, impeccably shot and lit by Douglas Slocombe. The stable, beautifully presented silent film on the Bijou screen gives us a glimpse of the brightest star of British film in the early 1920s: once again we see the distinct, strong features of Alma Taylor.

The comedy plays out and the film finds satisfactory resolution, with a hint of the dark humour that William Rose's more famous scripts boast. Yet there is an epilogue only we can provide, over fifty years on. Once we get over the idea that The Smallest Show On Earth is now far older to us than Comin Thro' The Rye was in 1957, we can see who won the battle for cinema more clearly. With increasing competition from television, a dearth of decent new product in the seventies, in particular, the cinema business all but collapsed. The Grands of this country went the way of the dinosaurs, becoming bingo halls, concert venues (The Grand seen here was then the Hammersmith Odeon, now the Hammersmith Apollo, home to Kate Bush's comeback) or evangelical churches, if they were lucky, flats if they weren't. The nearest cinema wein Bristol had to The Grand, the 2000-plus seater Ambassador on Winterstoke Road, is now an indoor climbing centre and a car showroom.

So what of the Bijou Kinemas? Well, in the UK some still survive; small businesses, volunteer or community run, adapted cinema and arts venues showing mixed programmes including all sorts of films, even silent ones. In a way, Watershed could be said to be one of the Bijou's spiritual successors today, a place to watch the "Old films, Classics, you might say..." in the words of Mr Quill.

This is a rare opportunity to see an overlooked gem of the British film industry, on the cusp of change from the glory years of the ‘40s and ‘50s to the darker days of the ‘60s and ‘70s, on the big screen. It hasn't been shown on the small screen for a decade, and is otherwise only available for home viewing on DVD in an out-of-publication box set. To see it on the big screen, on 35mm, is a treat I've been looking forward to. It willdisplay the wonderful work of Douglas Slocombe to its very best advantage, and transport us back to the Bijou Kinema, Sloughborough, of 1957.

The Smallest Show on Earth screens on Sunday July 10th at 12pm as a part of our focus on cinematographer Douglas Slocombe.