Skip to main content
Search the site
Found in: Conversations about Cinema

French philosopher Gilles Deleuze once wrote that “[T]he great directors of the cinema may be compared . . . not merely with painters, architects and musicians, but also with thinkers.” This seems to contrast with the historical origins of the art, whose roots lie in circus sideshows and not in theoretical exercises. Yet, the complexities of meaning that filmmaking has produced have turned a form of entertainment into a thought-provoking practice, whence the flourishing of ‘philosophy of film’ classes in university departments all around the world.

Deleuze also added that the history of the cinema is a “long martyrology”, meaning that cinema directors are much more vulnerable than other thinkers or creative artists when it comes to conditions of repression and censorship. As the unjustly imprisoned know, often to their cost, it is no easy task to prevent someone from thinking. It is relatively easy, though, to steal from them those technical skills and the equipment without which their activity is no longer practicable. And this happens relatively often, considering the keen interest that political power has always had in cinema; Plato may have expelled the poets, but he entombed projectionists in their cave. Filmmaking therefore expresses not only the power of thinking, but also its inherent fragility. A fragility that becomes apparent whenever thoughts leave their creators’ minds, and start wandering in the real world, or when a film is screened outdoors in daylight. 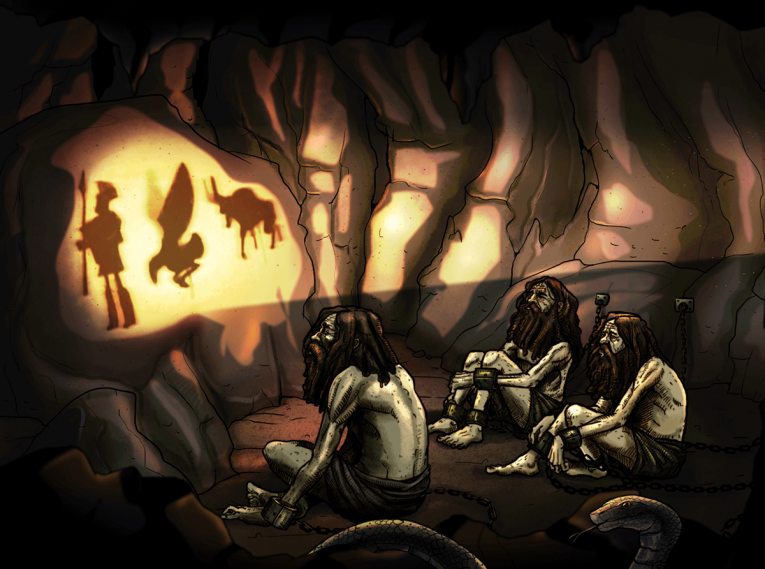 In the allegory of Plato's Cave, those unaware of Theory of Forms are like the prisoners of a cave, unable to see what is behind them, but able to watch the wall of the cave, where images from the parapet are cast from the fire burning behind them, much like the projection of images into a cinema.

Yet for philosophers, thinking and writing on cinema holds a promise of liberation. It permits them to explore a realm that inevitably breaks the one-dimensional character of the written word. It embodies reflection, adding images and sounds that lend it vivacity and draw us to it. How effective can this extended expressiveness be in conveying complex ideas or in describing concrete scenarios that otherwise we might only vaguely imagine? How can films help us think of matters such as violence and radicalism, while provoking our empathy and solidarity?

By bringing our film club to Watershed and opening up to their wider audiences we aim to stimulate discussions around such questions, questions that exert a powerful attraction in their own right. We have chosen philosophy and politics as our twin guidelines as we think they express very well the two ‘souls’ of cinema: Thought and Action, Reflection and Movement, as well as the many ways to convert them into one another. “Action” is when the crew starts shooting, but it also marks the moment at which humans stop being mere bystanders, and become moral and political actors. What can we learn from such action? And is there something like a “thought in action”?

Starting in October with Utøya (Tues 30 Oct, 18:00), UWE and Watershed will present one film roughly each month (excluding December). A genuinely multi-disciplinary team of philosophers, political theorists, and cinema curators and producers have established a programme that includes movies of great impact – at the same time, appealing and inspirational for any audience. A list of speakers with different backgrounds and interests, ranging from university scholars to public intellectuals and activists, will contribute to animate and involve audiences in debates that will tackle some fundamental issues of today’s reality. The goal is not necessarily in finding answers but in enjoying the conversation, and exploring every implication that watching a great film can possibly contain.

This extension of Watershed's Conversations About Cinema in partnership with UWE Philosophy and Politics film club is generously supported by Social Science in the City and the Royal Institute of Philosophy.

Written by Francesco Tava, Senior Lecturer in Philosophy at UWE.

Utøya – July 22 Please note: This was screened in Oct 2018 In one single unbroken camera take Erik Poppe’s visceral, brutal, yet heartfelt drama seeks to recreate from the victim’s perspective the horrific mass murder of 69 defenceless teenagers at the hands of right-wing terrorist Anders Breivik at a socialist youth camp on Norway’s Utøya island.  Find out more Conversations about Cinema We think cinema is the start of a conversation. Talking to you at our Box Office, in the Café & Bar, before and after the films, online on social media, and reading your comments on our noticeboard deeply enriches the way we all understand the films we’re watching.  Find out more