Deftly captured by filmmaker Chloe Zhao's stunning and intimate cinematography, is horse trainer Brady Jandreau, performing a fictionalised version of his own life story as 'Brady Blackburn' in The Rider (Fri 14 - Thu 20 Sep). Surrounded by a supporting cast of his real-life family and friends, Zhao's dramatic instead of documentary approach is refreshingly earnest. An unusual and unique piece of filmmaking that, for its deftly handled dramatic re-imagining of rodeo life, infuses every frame with empathy.

In 2016, Jandreau was bucked from his horse and suffered a serious injury that left him with a metal plate in his head and recurrent seizures in his right hand. Having first sat on a saddle when he was just fifteen months old, it's fair to say that Jandreau's entire life revolved around rodeo. Along with his best friend, Lane Scott, Jandreau dreamed of turning pro. But such dreams of fortune and fame are hung on a blind horizon, something Jandreau knows all too well after his bucking bronco kicked up more than just a little dust - something we'll be hearing more about from Jandreau in person next week, when he joins us for a special preview screening of The Rider + Q&A, (Wed 12 Sep,17:50).

With such a serious story at its core, it's all the more incredible that The Rider is such a gentle film. Where the temptation of a documentary lens might have risked an ethnographic or othering view, Zhao's dramatisation lets us get close to the characters. So close, that we feel rather than learn their stories. Jandreau, as Blackburn, is able to show the complexity of emotion that comes with wanting to get back on the (here, literal) horse whilst also being too afraid to do so. The emotional weight of his hopes and dreams sits just as squarely on our shoulders as viewers as it does for him, precisely because we are invested in both the imagined world of Zhao's drama as well as its real-life implications; the tried and true dramatic stakes of our suspension of disbelief mixed with the simultaneous knowledge that he really is injured imbues his quandary with pathos and gravitas.

In an interview with Rolling Stone, Zhao explained decision to film in this way, suggesting that art has an ability to heal. That the characters could "play out some of their intimate personal struggles", rather than concealing them from an otherwise probing camera, gave Zhao the dramatic stakes she needed without exploiting the vulnerability of her cast. And they can act. Drawn to his rodeo skills in the first instance, what Zhao discovered was that Jandreau's horse whispering talents in manipulating wild and free-spirited animals might just be transferrable to the kind of manipulation required to get an audience to emote. And boy was she right. 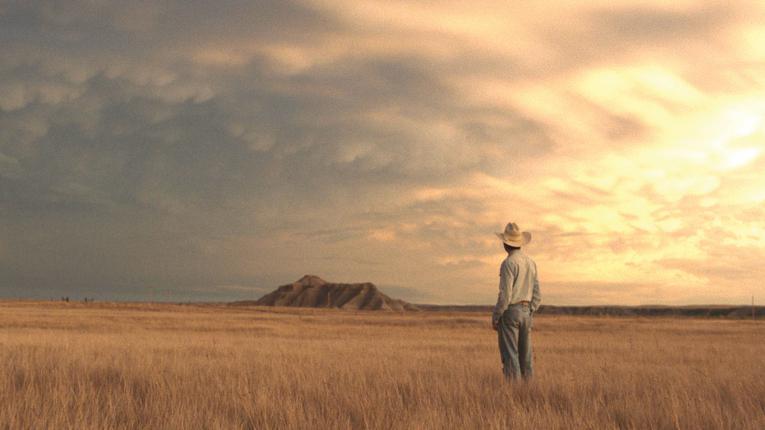 In addition to Jandreau's extraordinary performance and the astonishing true story at the heart of this compelling drama is the sweeping vista of South Dakota at dusk, holding it all in place. Photographed in the light of the moon or by the rising and setting sun, Zhao frames Brady Blackburn's existential contemplations in a liminal golden hue - an unlikely halo, illuminating his almost saintly pursuit of faith in the mythology of the American Cowboy. Searching into the distance, one wonders if the light will ever touch the horizon, or if the truth that sits somewhere between drama and documentary can be found there, visible but blurred, in the sublime light of South Dakota at dusk.

Join us for a very special preview screening of The Rider (Wed 12 Sep, 17:50) followed by a Q&A with star Brady Jandreau.