Filmed and set in 1971, New York, Klute, directed by Alan J. Pakula, is a paranoid neo-noir with all the trademark noir characters. The film’s title is awarded to Detective John Klute (Donald Sutherland), which is problematic for numerous film critics because it is Jane Fonda’s femme fatale character, Bree Daniels, with whom we are aligned. To take lead from film critic and historian, Pamela Hutchinson, who suggested in her Philip French Memorial Lecture that film critics place a female stars’ name in front of a film, I’m re-claiming this film as Jane Fonda’s Klute.

Shot during the height of the second-wave feminist movement, critiques of the time, and contemporarily, praise Klute for casting Fonda as the complex, high-end sex worker. It is also praised for its sexual politics, the counter cultural female storyline, and its feminist cultural afterlife. To the film’s credit, Klute also controls the male gaze; two sequences that deserve revisiting utilise its mise-en-scène to subvert the male gaze.

After a terrifying night in her apartment, where Bree is haunted by the invisible spectre that lays behind the shrill tone of the telephone, a cut takes us to the following morning where Bree is preparing for her working day. As the camera follows her moving from one space to another, a notable shot frames Bree’s reflection in her mirrored French door wardrobe. In turn, the individual mirrored squares fragment her body threefold. This recalls Laura Mulvey’s seminal theory of the male gaze (Visual Pleasure and Narrative Cinema, 1975) insofar as Bree’s body is presented as a cut-out or an icon, destroying the verisimilitude of the screen; thus, controlling the male gaze. 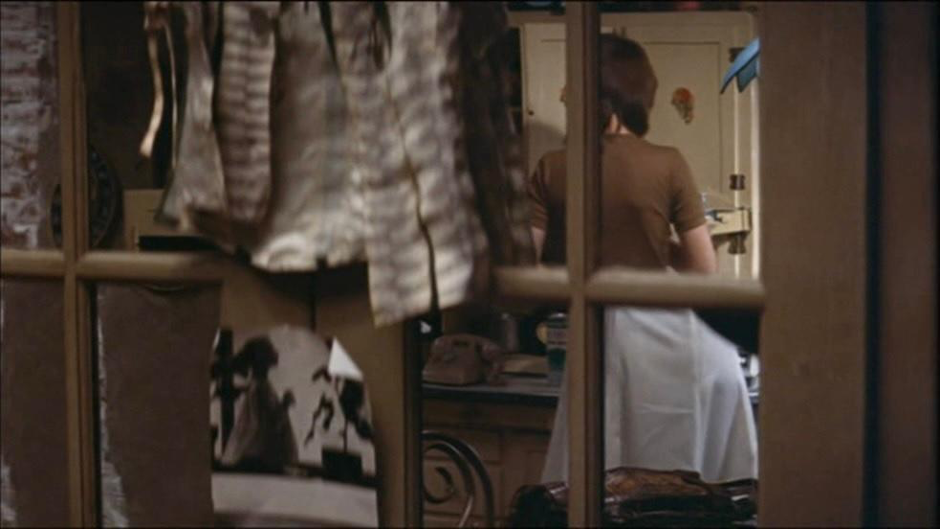 Later, away from the domestic sphere, Bree visits her elderly client, Mr Goldfarb (Morris Strassberg) at his garment factory. As if she were one of Goldfarb’s headless mannequins come to life, Bree performs a serpentine-like striptease – activated by his gaze. The lamp behind Goldfarb awards him a lit view of Bree that we are denied. Making use of French doors again, the separate panes of glass fragment her body, foreshadowing Bree’s declaration to her therapist that all she wants is to be “faceless and bodyless”.

Figure 2: The male gaze is subverted by the placement of light and the door fragments Bree’s whole body, Klute (1971)

In today’s post #MeToo climate, Jane Fonda’s Klute can be celebrated for its female agency and innovative use of its own mise-en-scène to control the male gaze. However, I wonder, if Klute were to be remade today, would the detective role be awarded to a man? Recent Neo-noir films such as the independent filmmakers Karyn Kusama’s Destroyer (2018) and Carol Morley’s Out of Blue (2018) prove that female detectives get the job done too. But perhaps not in Hollywood.

Based in Brighton, Catherine Putman has MA and BA degrees in Film Studies from the University of Sussex.  From a working-class background and striving to make changes in her life, Catherine proudly gained her degrees as a mature student after a thirty-year gap in education. Passionate about researching and writing on film, Catherine has subsequently had film articles published in Senses of Cinema. Her debut piece focuses on Kelly Reichardt’s ‘unique temporal rhythms’ in the ‘anti-Hollywood’, Meeks Cutoff (2010).  Her second article, featured in the ‘World Poll’ issue of Senses, pays tribute to #fridayfilmclub.  This virtual club was set up by the independent filmmaker, Carol Morley – via Twitter – to bring film lovers together during the first lockdown.  Catherine writes on the films of other women filmmakers such as Clio Barnard, Lucrecia Martel, and Andrea Arnold.  Whilst many people are struggling financially due to the pandemic, Catherine regularly recommends and writes on films that are free to stream via her social media.