Skip to main content
Search the site
Found in: What we do

Back in February 2014, Watershed and creative agency Latimer Group invited twenty young people in Bristol to work with them to produce the ideas that would become Rife Magazine. Named Bristol Talent Lab, it provided a programme of workshops, talks and activities that asked what they needed from a platform. The results of that lab became the framework that built the first version of Rife.

We didn’t know then that Rife would become the starting point for thousands of young people’s creative journeys.

Seven years on from Bristol Talent Lab, we thought it would be interesting to get an insight into how we’ve developed since then, and revisit some of our learning and successes. Here are some of the themes that have helped us evolve – and keep evolving.

The whole point of Rife right from the beginning has been to work alongside young people to bring their ideas to life. This hasn’t changed. We may have a swankier website now, but we’re just as set on providing young people with the confidence, skills, and resources they need to make what they want to make, and never tell them what or how to think. We’re constantly thinking about the power imbalance that takes place when you’re creating a learning environment like this one, and we are hyper aware that we’re not here to dictate – we're here to facilitate.

A good example of our iterative approach is how our application process for Content Creators has changed since 2014. We did a lot of work around language over this time, changing the job title from the original ‘Young Journalist’ to ‘Content Creator.’ As well as mirroring a shift in the industry from traditional skills to multitalented portfolio careers, we realised ‘journalist’ is a loaded term that assumes a specific, specialist education – when at Rife you just need brilliant ideas. We also changed the way we interviewed, creating an interactive group interview with the help of past alumni that wasn’t ‘cringe-worthy.’ 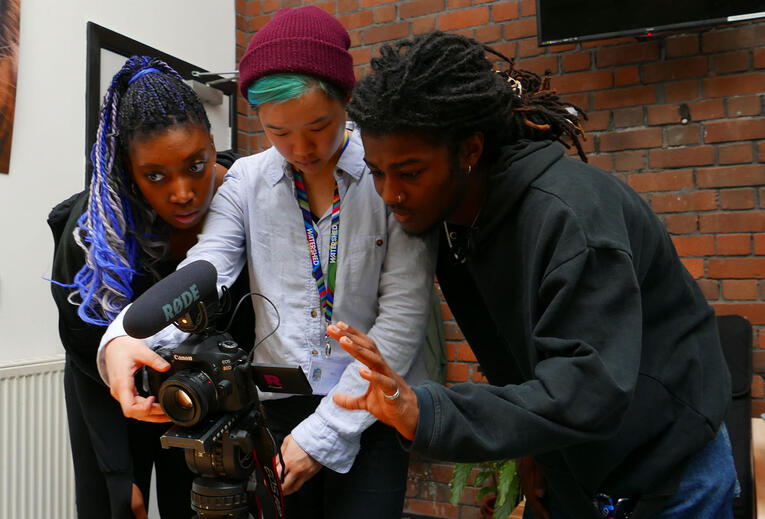 One of the things we hear most from young people is that they don’t feel like they matter, and that their work is not important enough to take notice of. A defining moment of their journey is often publishing their first piece on Rife and soaking up a bit of well-deserved glory from their friends and family. Further than that, we introduce them to public speaking, facilitating workshops, and loads more to boost their sense of self-esteem. As former Rife content creator and ascendant writer and director Yero Timi-Biu puts it in her article on gal-dem: ‘This year I was lucky enough to be mentored by [ex-editor] Nikesh Shukla and [Engagement Producer] Vanessa Bellaar Spruijt at online youth platform, Rife Magazine. Every single day I was told that my voice is valuable, my time is valuable – I am valuable. I quite like to think of it as a training ground in understanding my own importance.’

There are lots of incredible places our creators have been after their experiences with Rife: some have become founding members of publications including editors at gal-dem, filmmakers at places like The Guardian, and some have taken the next step into their journeys with organisations such as Rising Arts Agency. Recently, one of our cohort, Keziah Wenham-Kenyon, was employed at Crack Magazine as part of the Creative Workforce for the Future programme here in Bristol and he has found ongoing freelance work there. Another of our content creators, Asmaa Jama, was commissioned for the BBC's New Creatives as part of their interactive strand after connecting with the Pervasive Media Studio while working at Rife’s office in Watershed. We’re proud of all our alumni.

Ask our previous content creators: once you’re part of the Rife in-house team, we do our very best to stay in touch with you forever after you’ve completed your six-month contract with us. We try to re-employ our former creators in lots of different number of capacities: panel judges, facilitators, interviewers, filmmakers and more. We especially try to get previous content creators to train up incoming ones, creating a cycle of skill-sharing and forging networks between local young creatives that weren’t there before.

We are immensely proud of the breadth of work with other organisations we’ve achieved ever since the earliest days of Rife’s inception. When we started the programme, we concentrated on learning from those doing the best work in youth engagement across Bristol, particularly with vulnerable young people: Creative Youth Network, Prince’s Trust, Babbasa, Trinity, and a lot more. Through these projects we learned a lot about the best practice around language, asking questions, accessibility, issues that might arise, and what young people really care about. Things we learned then are carried through to now, including upfront payment for travel, and different ways of applying for our opportunities.

Since then, we’ve worked on films with South Bristol Youth, Empire Fighting Chance, City Academy and more, and have run work experience placements for UWE Creative Writing students since 2015. We’ve also worked alongside other arts organisations including In Between Time and Arnolfini. Our approach to working with these very different organisations has always been inspired by the young people we work with, who are incredibly capable and deserve a chance at working anywhere and everywhere. Through working with partners, they have been able to deliver work on time, to an agreed brief, while still making work that expresses their distinct point of view.

Over the last seven years Rife has partnered with BFI Film Academy to deliver hands on filmmaking for 16 to 19-year-olds. Taking part is just one of the many ways people connect with Rife. They might start out doing work experience with us, then apply to do the Film Academy at Watershed, and eventually work with us as Content Creators. Rife alumni Molly says, “BFI Academy gave me the confidence to apply to real world experiences. At Rife, I’ve learnt skills I can use and build on in different areas of the media industry which will help me develop onto a path I’d like to choose.” Since Rife, Molly has worked on a feature film at Pinewood Studios, the BBC, and several independent production companies. Watch Am I A Bad Kid? about school exclusions, and This Hair is Beautiful which sees young people of colour celebrating their hair, as some brilliant examples of recent BFI Film Academy work.

Recently we’ve started collaborating with Creative Workforce for the Future and Creative Access to support bigger projects that nurture underrepresented young people in the creative industries. Through being a part of Creative Workforce for the Future, we have come to better understand how institutional discrimination and systemic oppression slows and obstructs career development for young people, particularly those from underrepresented groups, and have responded by widening our callouts to those aged thirty and under in the West of England.

Putting you in touch with the right people

One thing we have heard repeatedly over the seven years of Rife’s work has been that it’s hard to find creative opportunities in Bristol when you don’t know where to look, or what to look for. You can hear Naz Ahmed say it in the original Talent Lab video: “youth opportunities in Bristol do exist, they’re just kind of hard to find. And unless you know the right people, you don’t really hear about these opportunities.” Makes sense to us. We’re always trying to find a remedy to this by sharing all the opportunities we can on our social media channels and giving individual heads-up to our previous content creators. We’ve also launched the Meshworks newsletter in collaborations with partners in the city, which features a roundup of opportunities.

Whatever we are working on, it all comes back to changing how the creative industries work and creating pathways for young people that are not dependent on having a degree or existing networks. When we run work experience sessions with fifteen- and sixteen-year-olds this becomes particularly apparent: they don’t know which jobs exist in these industries, but they’re dying to learn. We are confident that within our alumni there are people who, in ten years' time, will be running organisations and shaking things up. Rife is about their experience whilst at Rife, but it is also about supporting and uplifting the next generation to make the changes they want to see. An example of this our 30 Under 30, which celebrates the achievements of so many inspirational young people across all sectors and reinforces the creative community that is so vital for them to succeed. 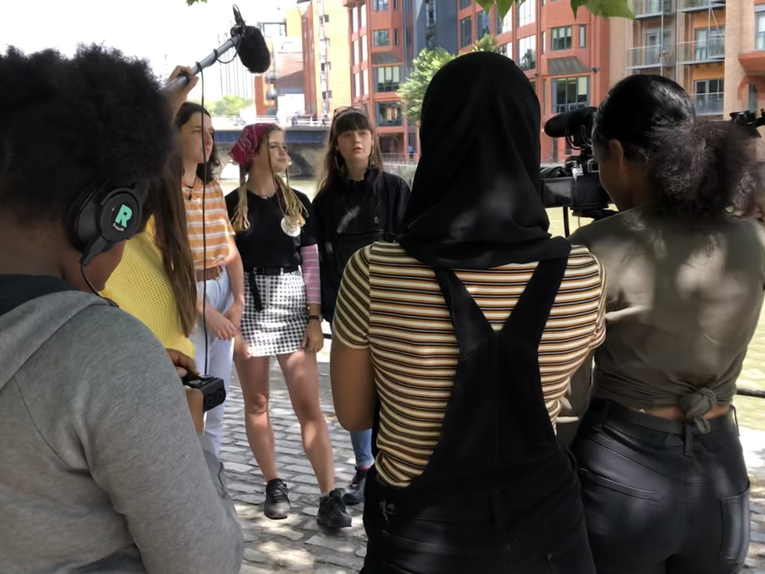 When content creators join us, sharing their work sometimes becomes a source of much shyness and stress. However, after it is facilitated by our team of producers, editors, and mentors over time, it soon becomes something they’re able to put in CVs, send to potential employers, and be proud of sharing around. Their portfolios become sources of pride and excitement that demonstrate experience to industry and prove reach of their work.

Often when we meet the young people we work with in an interview, they’re experts of content and branding already (this is also reflected in what the industry people say in the original Bristol Talent Lab video). What they don’t have, however, is a place to fail, learn, and fail again in an environment that is safe to do that in. For example, it takes considerable time, money, and resources to make your own film – and you can have all the brilliant ideas you want, but it still won’t get made. Rife pays young people a salary to bring those ideas to the table and to make them with our help. They are also trained in using software, creating social media posts, running workshops alongside more experienced alumni, photography and filmmaking skills, email writing, and loads more - all of which equip them with what they need to work in the creative industries. Unpaid internships only serve the elite – where's the justice in that?

As well as working with the Rife team of fellow content creators and facilitators, content creators become part of Watershed’s Creative Team, and are introduced to the Pervasive Media Studio. They are also offered a place in the Studio community, including follow-on residencies. Through our work with Creative Workforce for the Future and other programmes such as South West Creative Technology Network, we’re able to join the dots for young people into wider sector networks, too – they can make connections through their hub and industry placements, which helps them to gain a better understanding of the industry and offers the possibility to ask direct questions through our events, like Meshworks Power Lunches. 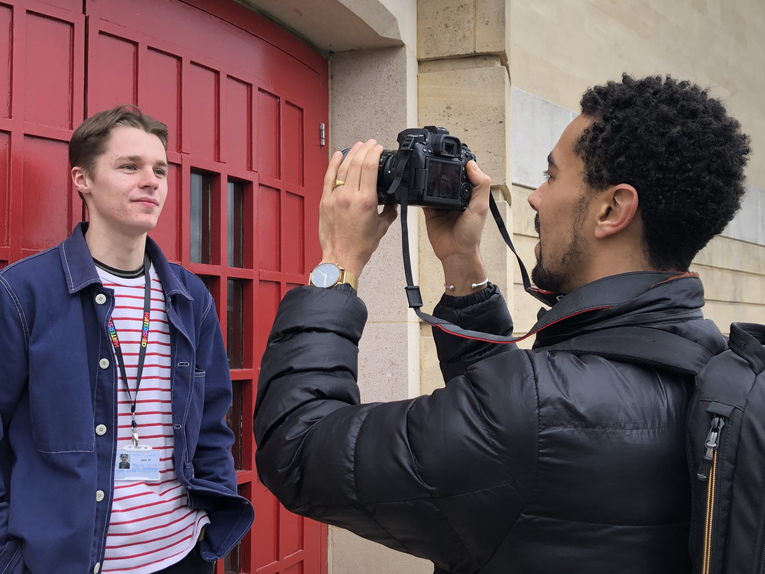 Our vision for the future

We’re currently working towards a less hierarchical structure that asks questions about the role of ‘editor’ in 2021, and striving to make our work even more young person-centred and driven. We think valuable skills are gained when young people lead on projects and have a say in where Rife goes next. We continue to be focused on collaboration, and want to continue an established recognition of the value each person brings.

We also want to keep talking about the changing landscape of the creative industries with those who are struggling to gain a foothold due to lack of contacts, resources, and time. We have already started doing this by widening the age requirements of working at Rife from 24 to 30 and want to continue to recognise and remedy these problematic systemic issues. We have also identified a need to look wider than Content Creators, and to turn our focus onto introducing young people to creative producing.

Work with young people What we do Engaging, supporting and equipping the talent of tomorrow.  Find out more