“All you’ll need to do is go up the stairs” – sounds simple right? We walk up flights of stairs every day without thinking about it. However, Parasite ingeniously depicts one very complicated staircase. Through this sentence said at the very end by Ki-Woo (Choi Woo-shik), the Kims’ son, the reality of class hierarchy and social mobility is deafening. The director Bong Joon-ho (Okja, Mother) supports this with a soundtrack that is dark yet hopeful to represent the Kims’ social standing and follow them on their journey. The melody is structured in repetitions of ascension and descent as they move between their shabby semi-basement flat, to the rich family house in the hills and the bunker that is hidden below. Crossing over many genres; comedy, drama and thriller, the social critique seen from the very start is there every step of the way, giving us a dramatic but real portrayal of the effects of Capitalism. 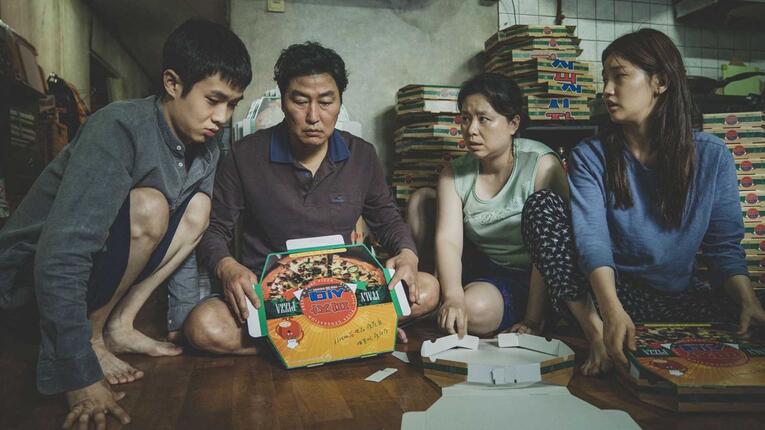 Parasite is a heart-wrenching story of the infiltration of one family, the Kims, into the world of another, the Parks. Trying to survive somewhere they don’t belong; we are taken along the Kims’ journey of battling for a life to leech off the wealthy. Though this is brought to an abrupt ending. As the sky goes from blue to grey, we are taken from comedy to tragedy and see the splattering of rain become the splattering of blood. Any hope we had for the Kim’s is crushed by the director Bong Joon-ho’s bleak, unrelenting, portrayal of the harsh truths of class division in South Korea.

JongMi Kim (University of Coventry) mentions how Through Mrs. Park we see the typical Korean ‘Tiger Mum’, a parenting technique that demands academic excellence from their children. In South Korea, educational attainment is valued highly for its ability to help you break free from the bounds of social mobility, but because of how society is stratified between two extremes of rich and poor, it is not easily accessible for everyone, which we see through the Kims, highlighting one of the many struggles of class status on family culture. 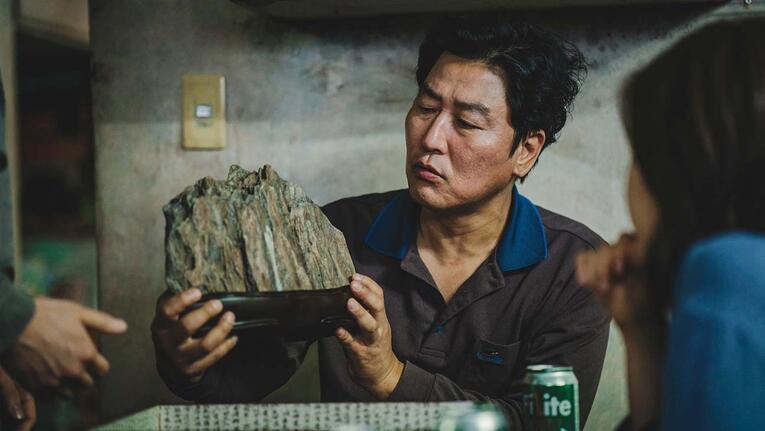 Aligned with the masterful depiction of class division, we are shown its function to increase the lack of solidarity among those who are poor. Through the Kims’ cunning plan, we see the Parks’ old housekeeper Moon-Gwang (Lee Jeong-eun) replaced with their mum Choong-Sook. One night, Moong-Gwang turns up and desperately asks to be let in and we discover that her husband had been secretly living in the – which the Parks don’t even realise! A symbolic representation of their oblivious state towards the lives of those under them in class hierarchy.

Whilst both families have endured suffering at the hands of the wealthy, the Kims are hesitant to align themselves with Moon-Gwang and Guen-Sae’s (Park Myeong-hoon) hardship. Shocked by the Guen-Sae living in the basement and stealing from the Parks fridge for survival, they dismiss Moon-Gwang’s call of being “neighbours in need.” In a brutal battle between the two, we see Choong-Sook kick Moon-Gwang down the stairs to stay at the very bottom of the food chain in fear of losing her position. The social standing of the Kims is embodied in their semi-basement. As they can still see over ground, they believe they haven’t completely hit rock bottom to basement level like Guen-Sae and Moon-Gwang. Why would they want to liken themselves to those lower when they are trying to climb the ladder? 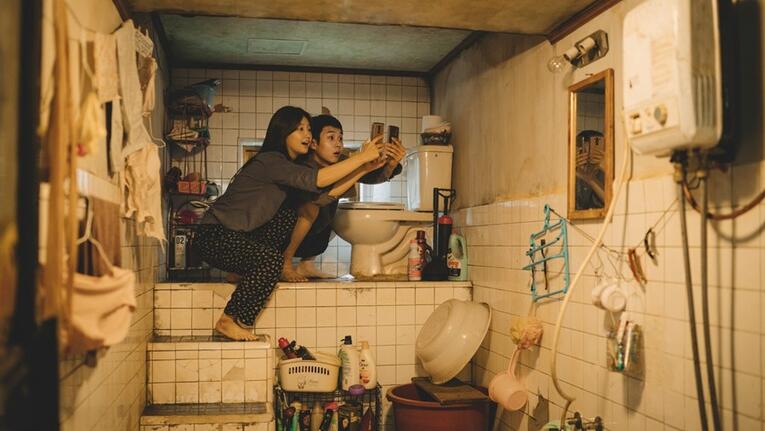 Whilst Parasite can be outlandish and metaphorical in many scenes, it doesn’t fail to provide a realistic depiction of what life can be like in the semi-basement, flood-prone apartments. Since released, it has drawn much attention to the horrible living conditions that many have to endure in South Korea, and has spearheaded the government into providing financial aid for many dwellers; functioning as a life preserver to prevent them from sinking further underground. Sadly however, in Bong’s reality, the Kims do not receive anything of the like.

Bong utilises the contrast between housing to propel the film’s social commentary. Astounded by the glass-walled rooms, we see the Kims using them as windows to their dreams; to the green landscape and sunshine that their semi-basement showcasing the local drunks’ favourite urination spot could never provide. In one scene, Ki-Woo gazes out onto the Parks’ garden party and asks “Will I ever fit in?”, followed by a sigh of unanswered melancholy, the scene tellingly sets us up for the answer we all know – he never will. 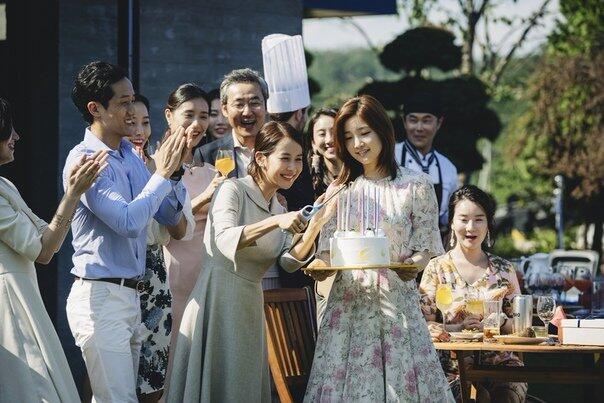 In the final scenes we are given Ki-Woo’s point of view, which Maria Rousso (San Raffaele university) believes to be out of sync with the rest of the film as the Kims are presented as an ensemble piece but I think we see through his eyes to be given the harsh reality that there is no hope for even the next generation. Bong doesn’t want to leave any space for even a glimmer of hope as Capitalism doesn’t either.

We are taken on a journey to figure out who the parasite is between the family dynamics presented but we soon come to realise that the true parasite is Capitalism. Due to class division, both families fail to liken themselves to each other, and in the end, all humanity and division is lost in a bloody fury of anger and heart-ache. During the pitiless fury of Guen-Sae who seeks revenge for the death of his wife Moon-Gwang, Da-Song’s (the Parks’ son) dream birthday party becomes that of nightmares. They say that grass is greener on the other side, we are certainly shown how that can be true, but this grass however, is stained with the blood of the rich and poor and at the end of the day, they’re not so different when their mortality is shown. Capitalism has forced those at opposite ends of the staircase to live completely separate lives but survive off each other, and essentially Bong shows us the imperfections of the system and how it effects the South Korean Society in a satirical, but dramatic piece of contemporary cinema.