Read more
Found in: Conversations about Cinema
Portrait of a Lady on Fire, 2019, Céline Sciamma.

On a cliffside manor on an island off the coast of Brittany, Céline Sciamma's Portrait of a Lady on Fire explores the all-consuming love affair between two women Héloïse (Adèle Haenel) and Marianne (Noémie Merlant) amid the patriarchal customs that existed in the 18th Century. Through this masterpiece, we see film theorist Laura Mulvey’s concept of the male gaze be casted far out at sea from the island our protagonists live on in favour for the female gaze.

Isobel Carrol (UWE Philosophy student) in the discussion mentioned how class division lines are skewed between Héloïse who is to be wed in an arranged marriage; Marianne who is a for-hire painter brought to the mansion to secretly paint a portrait of Héloïse, and Sophie (Luána Bajrami), the maid of the house. Albertine Fox (University of Bristol) believes this happens due to the lack of male characters for the female protagonists to fight over. Through the lack of male presence, there is less assertion of patriarchal customs, so our three protagonists are not as constricted in their roles and can claim more freedom and autonomy. The fluidity of power flowing between them from one scene to the next echoes the flow of the sea that surrounds them. However, whilst the power of men and the patriarchal societal system is not as apparent, Sciamma does not let us forget about its controlling force through the words of the women. 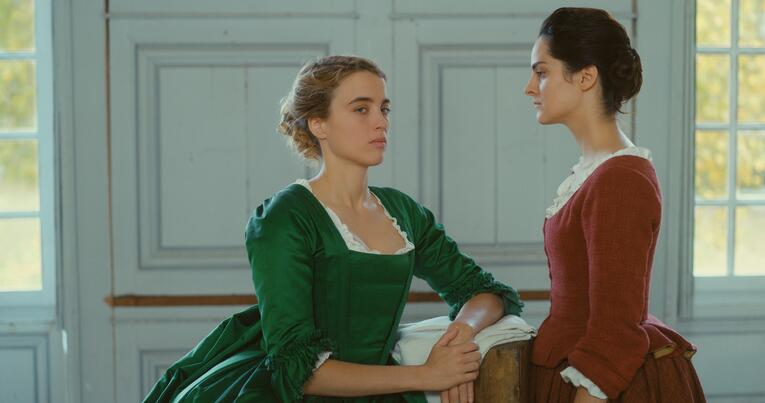 I think there is something very beautiful about the scenes of painting that string together Marianne with memories of her past. Art lives on beyond our death. It’s a way of transcending memories beyond that moment in time. The themes explored are channelled through the strokes of a paint brush and immortalised on canvases to live even through our society, revealing how the way we view women on screen is similar to how women were viewed at that time in society and on canvas. This is one way that Sciamma masterfully uses the period setting to mirror contemporary feminist issues and lift this period drama into a contemporary world.

During the 18th Century, women were often painted so that their portrait could be used as an offering to an undecided male suitor. Their autonomy gets stripped from them and are seen as nothing more than a pretty picture. This is exactly why Héloïse refused to be painted; she wanted to hold onto her freedom. However, as the two women work collaboratively on this new portrait, the objectifying grasp of the male gaze has disappeared and Héloïse still retains some semblance of control.

Whilst watching, I couldn’t help but think of how fitting it is with International Women’s Day that has just passed on the 8th of March as it empowers and recognises those who are underrepresented in society and are often not protagonists in film. A subplot about the maid Sophie who deals with an unwanted pregnancy uplifts the taboo of abortion, radically showing us the strength behind closed doors and the power of sorority whilst confronting the societal representations enforced upon women. 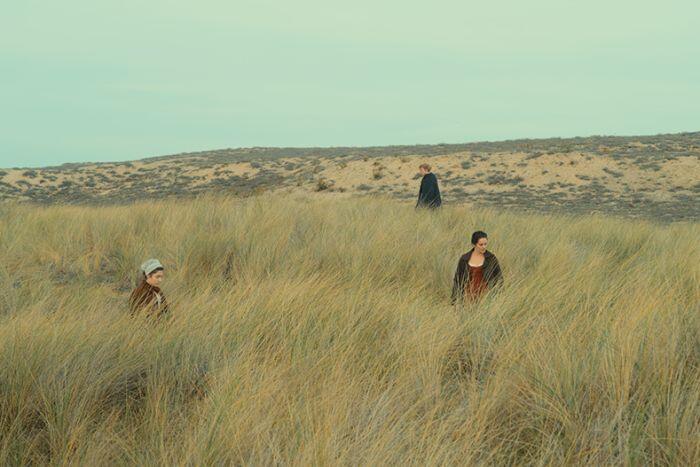 Through the female gaze, Sciamma masterfully depicts the power our protagonists hold, while balancing it with their limitations. The setting of the film reveals exactly this. Much like in today’s society, we are only as free as our environment lets us to be. Being set on an island surrounded by water, they exist in a liminal space and can only go so far. Just like Héloïse who cannot swim, their love would not stand a chance and nor would she against the natural force of water and the forces of patriarchal customs. 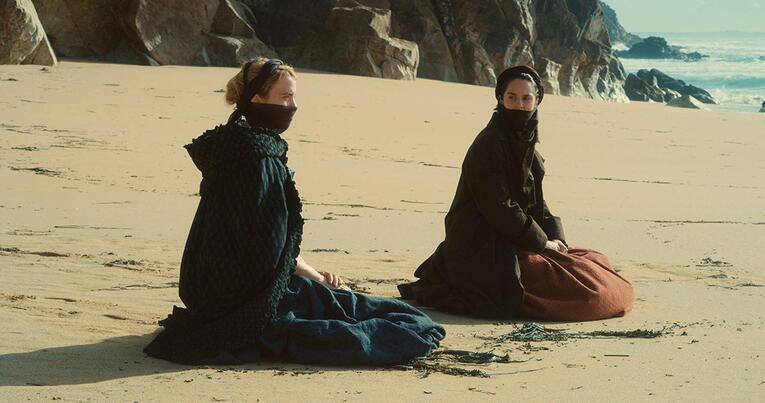 Playing with typical conventions seen in Romances, we are given the pervasive crackling of a fireplace carried throughout to fill the silence with ambience and reflect Héloïse and Marianne’s slow burning affair. Though this is almost always juxtaposed with the sound of the harsh waves, not letting us forget the forces of the Patriarchy. In the discussion, Isobel Carrol mentioned how she thought the water only stood for the support of the fact they’re on an island and as a contrast to the fire seen throughout, but I would argue that water holds just as much importance and symbolism. When Héloïse’s dress catches fire, the flame is smothered by a blanket held by another woman showcasing the works of female solidarity. In the scene where Marianne accidently sends the canvas by the previous male painter up in flames, she decides to throw it into the fireplace. Through destroying the previous painting that tries to objectify Héloïse, she gives back her autonomy and fights against patriarchal customs for their love. However, if a wild fire did take place, the water surrounding the island would prevent it from travelling further. Whilst their love uncontrollably encapsulates the island, water controls fire and essentially controls and entraps their love.

Portrait of a Lady on Fire is a beautifully constructed film about the power of women and the female gaze. Whilst it is a period romance, the messages embedded within have no time constraints and are relevant today. Sciamma brings to life a mesmerising plot that revolves around patriarchal representations and ignites a contemporary debate about past and present customs. This wonderous story endlessly provokes thought and emotion and I urge that you watch it with our society in mind.