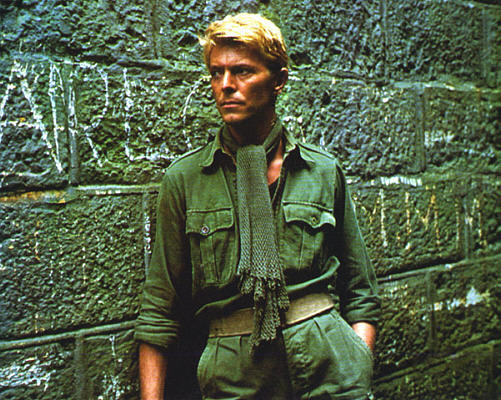 A Japanese film starring David Bowie as a prisoner of war might at first sound like an odd idea, but the lesser known Merry Christmas Mr Lawrence (1983) was, and still is, critically lauded as one of David Bowie’s strongest screen performances.

A powerful wartime drama that turns the traditional Prisoner of War film on its head, the film is based on author Sir Laurens van der Post’s books The Seed and the Sower (1963), The Night of the New Moon (1970) and his experience as a POW in WWII. Adapted for the screen by the film’s director Nagisa Ôshima and writer/director Paul Mayersberg, the film centres on Major Jack Celliers (Bowie), a character based on someone van der Post met as a POW.

Ôshima’s choice to cast the iconic David Bowie, apparently after seeing him in a production of The Elephant Man on Broadway (1980), is what affords the film with its unusual edge, and non-traditional approach to the war film genre.

In contrast to traditional and conservative views of British POWs at the mercy of ‘the enemy’, the story centres on how the British POWs and Japanese soldiers struggled to understand each other’s cultural practices, their moral and ethical values and how unexpected bonds between them were formed. Bowie’s persona brings with it a strong anti-establishment sentiment and Celliers’ rebellious character earns him the respect of the enemy in this complex drama of honour among men.

It is this idea of honour among men, however, that does adhere to the conventional POW film narrative. In a confined world where military and cultural practices clash and meanings are lost in translation, all that is left is the honour of individual human character; strength and courage in the face of opposition. There is respect between the two leading men, as individuals who rise above their opposition as enemies, but who are still at the mercy of war.

Merry Christmas Mr Lawrence is an intelligent and engaging film, told with as much gravity as wit and dry humour. Along with brilliant performances from Tom Conti (Lawrence) and Ryuchi Sakamoto (Yonoi), it holds its own alongside other Bowie gems such as The Man Who Fell to Earth (1976) and Labyrinth (1986), and is one of Ôshima’s greatest films.

Merry Christmas Mr Lawrence screens on Saturday July 30th as part of Cinema Rediscovered. The 2K restoration will be presented on DCP. It was undertaken by Schedule II from the original 35mm CRI negative and mono sound recordings. Both picture and sound have been remastered for digital 5.1 presentation whilst retaining the unique look and feel of the original 35mm elements. With thanks to HanWay Films’ Producer Jeremy Thomas and Alainée Kent and Altitude Films.