Find out more
Found in: Women’s Stories from the Global South Cinema Rediscovered 2022 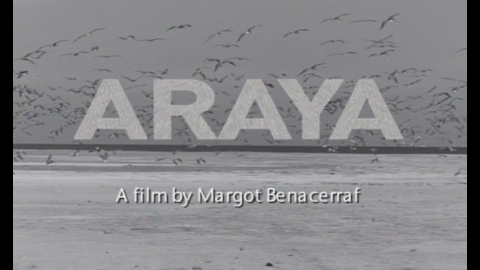 Hailed as a landmark work of Latin American feminist cinema, and the only feature film by pioneering documentarian Margot Benacerraf, Araya is a poetic, visually arresting look at life on Venezuela’s Araya Peninsula, where generations of labourers have depended on mining the arid region’s salt pans for their livelihood.

With industrial mechanisation threatening to eradicate this difficult way of life, Benacerraf takes a final glance at the day-to-day routines of three families of salineros, capturing the strain of their work amidst the breathtaking but harsh landscape. From the salt miners to the fishermen who feed them, the film is a captivating, unsentimental tribute to the tenacity of their spirits.

Despite the win that it picked up at of the International Critics Prize at Cannes 1959, 18 years passed before the film was screened in Venezuela as its distributors remained convinced that ‘Venezuela was not ready’ for it and prioritized audiences in France and other markets. By the time terms were finally agreed, Benacerraf insisted that it be dubbed over in Spanish for the audience.

The film was embraced by artists and general audiences across the country, but eventually disappeared until it was recently rediscovered, remastered and reissued by Milestone Film & Video. The restoration also enabled the reconstruction of a scene which had been cut out of the negative by mistake decades ago without Benacerraf’s knowledge.

Women’s Stories from the Global South (& To Whom They Belong) Season Recently digitised or restored films from the Global South, written by and about women. The notion of ownership is explored in conversation with individuals working to challenge power imbalances that hinder access to these works by the audiences they represent.  Find out more
Cinema Rediscovered 2022 No date/time details available. Celebrate the return of the big screen experience at the 6th edition of Cinema Rediscovered (Wed 20 – Sun 24 July), Watershed’s annual festival showcasing brand new restorations, contemporary classics and film print rarities from around the globe  Find out more