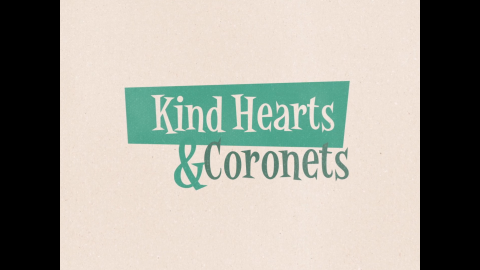 "Kind Hearts and Coronets is, for me, the greatest of all screen comedies. Not even Some Like It Hot can touch it!" - Terence Davies

Perhaps the darkest of the Ealing comedies, this coolly elegant, subversive masterpiece was originally billed as "a hilarious study in the gentle art of murder."

Dennis Price is sublime as Louis Mazzini, an embittered young commoner determined to avenge his mother’s unjust disinheritance by becoming the next Duke of the family. Using a variety of imaginative techniques, Louis proceeds to eliminate every single nobleman and noblewoman ahead of him in the succession.

In an inspired tour de force, Alec Guinness famously played eight different members of the same family, of both genders and a six-decade age span. Because he was nobody, he could be anybody!

Infused with the superb cinematography by Douglas Slocombe, Kind Hearts and Coronets is a timeless work of immense sophistication that explores the fluidity of moral concepts in the face of personal desire. It was so beautifully made, it left filmmaker Terence Davies mentioning the word ‘gorgeous’ at five minute intervals throughout the commentary on a recent home entertainment re-release.

Slocombe at Ealing: Kind Hearts and Coronets Article by James Harrison For this fourth year of Cinema Rediscovered we continue to celebrate the work of cinematographer Douglas Slocombe (1913 -2016) with a special 70th Anniversary screening of Kind Hearts and Coronets (1949). South West Silents' co-founder and co-curator at Cinema Rediscovered James Harrison continues to look at the work of Slocombe and writes.  Find out more