William was selected as a participant for BFI NETWORK South Wests’ Script Development Lab in 2021. The lab is part of BFI Film Hub South West’s work to develop a thriving film sector across the South West. The hub is based at Watershed and supports filmmaking and exhibition through training and awarding National Lottery funding.

His sequence of photographic images played on a rotating glass disc was one second long. In recording it, he squeezed his eyes shut against blindingly bright lights and mouthed the words “Je vous aime” (I love you) at the request of Hector Marichelle, professor and director of the National Deaf-Mute Institute in France, who hoped to use it as a method of teaching deaf people to speak and lipread.

Demenÿ’s Chronophotograph technique (a precursor to film, which was officially born in 1895) would catch the attention of the Lumiere brothers and Gaumont. They and other cinematic pioneers would continue to develop cinema’s technical and artistic elements, but it would be another 30 years before cinema became the dominant mass entertainment form of the 20th century.

As someone who grew up mainly watching silent films as a child, usually on VHS tapes at my grandparents’ houses, or early morning showings on the BBC, my earliest cinematic memories are of black and white films with little to no spoken dialogue starring Harold Lloyd, Lillian Gish, Buster Keaton and Charlie Chaplin. It’s no surprise that I often wish I could live in that golden era of a century ago.

In 1921, the Great War was a distant memory. The Spanish Flu pandemic was over. People were ready to start living life again, and cinema was a big part of delivering Hollywood fantasy to a new generation of avid filmgoers.

If you were deaf in 1921, you might not have had as many options as your hearing contemporaries. Employment prospects would have been bleaker than today: working in a factory, learning a trade or working at one of the then-burgeoning deaf charities - but there was one thing a deaf person could do just the same as any hearing person back then: buy a ticket to the cinema and watch any movie they wished.

Silent films were accessible to all deaf people with clear inter-titles, a wide range of acting and directing styles from exaggerated comedy to naturalistic, sophisticated realism, and even easily lipreadable dialogue. Deaf Associations formed film clubs that would meet up to watch movies and discuss them afterwards. Deaf magazines such as The Silent Worker in America would have regular reviews of silent films, with some complaining of the orchestral accompaniment’s vibrations being distracting (silent films were, of course, not completely silent, often having live musical accompaniment).

In America, pretty much anything went in these pre-code era silents, including swearing. Mrs Elmer Bates, a professional lip-reader and teacher of the deaf, asked movie studios to tone down the foul language and tried to get the press on board with her one-woman crusade.

Mrs Bates made a tour of the downtown shows yesterday accompanied by a reporter who wrote down the picture talk, and at times the language was so vile that she had to stop… Curses, vile names and vile comments are indulged in by the performers while being photographed, often without the least semblance of relation to the play being performed.

The studios ignored Mrs Bates’ pleas, and George Demenÿ would have blushed to see the fruity language of these films continuing well into the 1920s. For example, this scene in the smash hit film It, featuring Clara Bow’s star-making performance that made her the first ‘It Girl’ of all. You can see Bow deliver a pretty clear rebuke to two social workers trying to take her friend’s baby (Gloria Swanson and Victor McLaglen had some pretty filthy mouths on them, too). 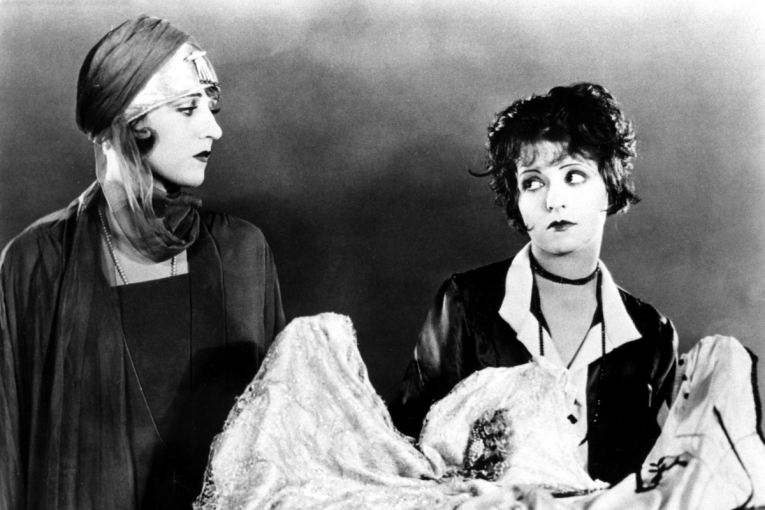 Deaf people also got their turn in front of the camera, their mannerisms and lip patterns indistinguishable from that of silent film actors: Granville Redmond (a close friend of Charlie Chaplin), David Marvel, Eduardo Romero (who would go on to add silent movie intertitles to films as a precursor of today’s subtitles) and Albert Ballin, who had long conversations with Alexander Graham Bell and once tried to chat up Mary Pickford, at that time a co-founder of United Artists and one of the most famous actresses in the world.

When Pickford politely asked if Ballin could lipread, a question he must have heard over and over, he replied: “No, I only kiss them when they are sweet like yours.”

They say cinema confers immortality on its stars. Sadly, that’s not true of our deaf silent film actors. Only one has any surviving footage - Granville Redmond in Charlie Chaplin’s A Dog’s Life and The Kid. The rest are believed to be lost, along with an estimated 75% of all silent films ever made - perishing in vault fires, decaying in metal cans, or being discarded to make room for newer movies. Our deaf silent film actors now exist primarily in still photographs and film posters, fading into history.

I can’t imagine how deaf cinephiles must have felt heading to their favourite cinema to be greeted by Al Jolson singing in blackface (warning: video contains racist and offensive imagery) in front of a cotton plantation. What’s also striking about the early talkies is how static they are. Actors stand stock still and recite their lines to one another. All the nuance of the gestures and physical movements of silent acting are gone, along with most attempts at creative camera movement. This phobia of dialogue-free storytelling is something that continues in many of today’s films.

The advent of sound in cinema started slowly at first, with many studios and stars resisting the lure of the talkies at first. Charlie Chaplin was one of the main holdouts, insisting that “I can say far more with a gesture than I can with words”. 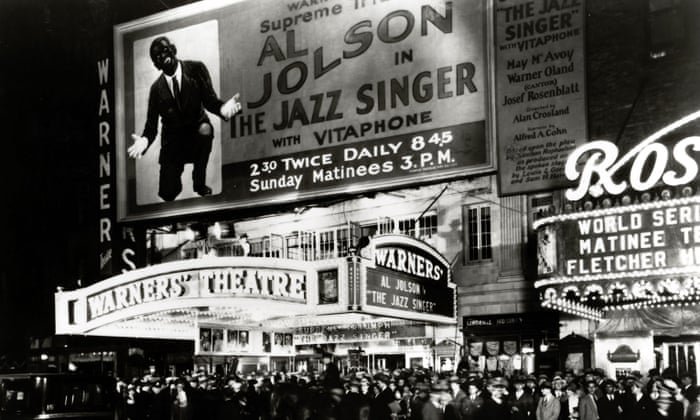 For a while, many film stars had something in common with deaf people: intensive sessions with diction coaches and speech therapists to try and improve their speaking voices. Sadly they could do nothing with Clara Bow’s Brooklyn accent, and her career ended at the relatively young age of twenty-eight.

Silent films continued to be made in the 1930s, but they were increasingly disparaged in the industry in strikingly similar terms to deaf people - as ‘dummies’ or ‘dumbies’. Talkies were taking over, and by the mid-1930s, even Charlie Chaplin succumbed with Modern Times, a film that mixed spoken dialogue, inter-titles - and a song and dance routine where Chaplin’s beloved Tramp uses his voice for the first and only time.

As a child, I sat patiently through that scene, wishing there were captions for the lyrics he was making up for the song. It was only recently that I learned he was singing gibberish: being deaf, I didn’t know.

That would be the typical experience of deaf cinema-goers for the next century:  locked out of the cinema, never to return to the same equality of access.

Today, Deaf people have to attend specially-scheduled open-captioned screenings of mainstream films thanks to your local cinema or catch foreign language films at arthouse cinemas like Watershed. At home, deaf people can go days without watching subtitled TV when the primary subtitling provider has a technical problem. Streamers such as Netflix, Amazon and NowTV don’t always guarantee complete (or even 100% accurate) captioning on their content.

Over the last century, deaf roles in cinema were often played by hearing actors, with occasional breakout deaf actors such as Marlee Matlin, Russell Harvard and Millicent Simmonds. 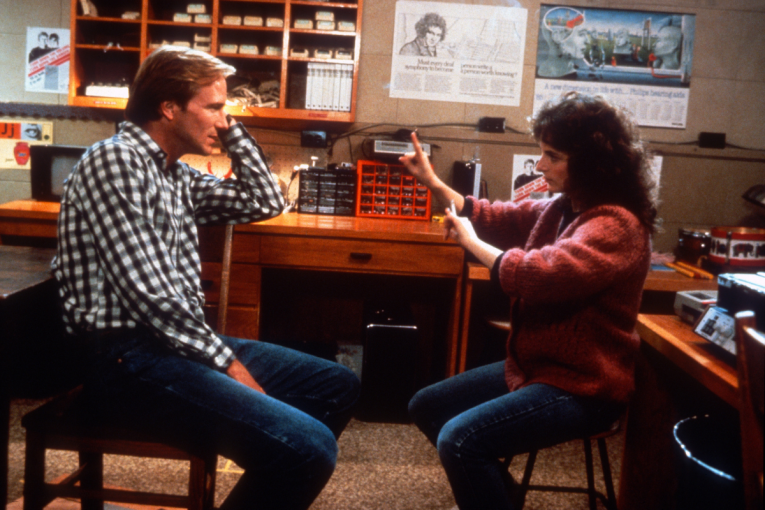 In 2021, one thing is immeasurably better than it was 100 years ago - and that’s access to the film industry itself. Broadcasters and streamers are becoming aware of the potential stories that deaf, disabled and neurodivergent creatives have to tell, such as the BBC and Netflix. Recent films such as CODA, Sound of Metal and A Quiet Place 1 and 2 are commercially and critically successful films with deaf characters and sign language at their heart. The Deaf Talent Collective is consulting with a wide range of productions in casting deaf actors. The Inevitable Foundation is supporting deaf and disabled scriptwriters with their bursary scheme. Various organisations such as Triple C, DANC, Deaf and Disabled People in TV and Underlying Health Condition are working tirelessly to improve the lot of Deaf, Disabled and Neurodivergent creatives. BFI NETWORK, above all, is becoming one of the best and most inclusive places for deaf and disabled people to develop their creativity.

I’m speaking from personal experience here: over the last few months, BFI NETWORK delivered in the South West by Watershed has supported me in writing and developing feature film projects, inviting me to various networking events and lectures and most recently supporting me in the writing and development of a new short film.

My short film Picturehouse focuses on the golden era of silent film. While not a silent film in its own right (in fact, I’d describe it as a detective story), it’s a deeply personal and heartfelt love letter to the films I watched and loved growing up; to the deaf actors temporarily immortalised on silver nitrate film; and most of all, to my grandparents who introduced me to those films in the first place.

BFI NETWORK has made me feel welcomed and valued as someone with stories to tell. They’ve gone above and beyond with their accessibility provision as well: Making sure I have suitable interpreters and live captions booked for online meetings; putting me in touch with fantastic script editors and production companies, and - best of all - giving me hope that a century later, there just might be a new era of deaf and disabled films with talent thriving behind the camera as well as in front of it.

William Mager is a writer and scriptwriter for film and television, based in Bristol. His work has been supported by Arts Council England, BFI NETWORK, Watershed, and The Literary Consultancy.