The story in A Moving Image (Sat 28 July, 16:00) centres on Tanya Fear’s Nina, an actress and artist, returning home to Brixton, after some time away living in the hipster enclaves of East London. Upon her return, shocked at how her old stomping ground has changed through the impossible living costs of London, Nina starts to work on a film about people getting priced out of their own neighbourhood. Nina is viewed with suspicion and contempt by locals who see her as an outsider, very much part of the problem that the area faces, and who think that her art is a distraction from the real battles to be fought. The project is an art-doc-drama hybrid, a description that can no doubt be applied to Amoo’s film, as he blurs the lines between fact and fiction. The film’s narrative is enmeshed with footage from the Reclaim Brixton march of 2015, which consists of interviews with Brixton residents and shots of protesters smashing up the shop front of estate agents Foxtons. 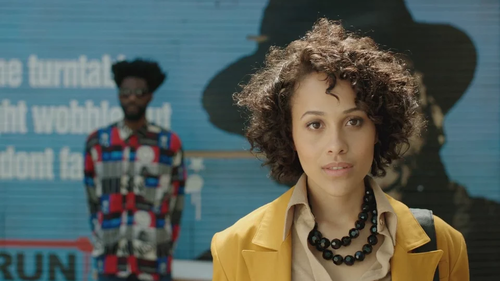 In the process of developing the project, Nina becomes entangled in a love triangle with Ayo (Aki Omoshaybi), a black politically engaged conceptual performance artist, who has been evicted from a squat on the street on which Micky (Alex Austin), a white famous actor, also from South London, has bought a flat. In other hands, perhaps, Micky would have been a middle-class yuppie. But Amoo, who has made him working-class and from Bermondsey, an area that has experienced fast-growing change, shows the multifaceted nature of the victims of gentrification.

As the project develops, Nina is forced to question her own motives after seeing how the ‘social cleansing’ of poor multicultural neighbourhoods is a complex intersection of class, race, financial and cultural factors - not just skin colour. “Don’t you have to be white to do that?” she protests before facing the discomforting truth that more educated, privileged returnees like herself may be part of the problem, rather than the solution. 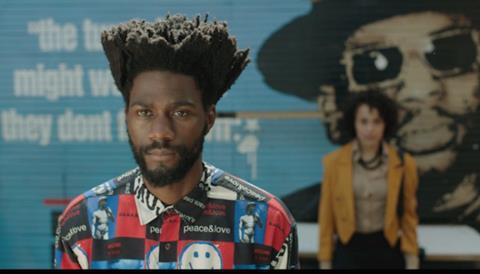 The dramatic backdrop to A Moving Image may sound grimly earnest, but, fortunately, Amoo’s approach is lively and adventurous. The film incorporates straight-to-camera diatribes, music, trippy fantasy sequences and poetry with a particular focus on a street busker character, Big Ben (musician Yinka Oyewole). Subsequently including video submissions from further afield, from the notably fast-gentrifying neighbourhoods of Harlem and Bed-Stuy, Brooklyn and Neukölln, Berlin.

Aside from questions surrounding race and class, the film explores the purpose of art and whether it can really affect change and the potential hypocrisy that exists being an artist and making a film about gentrification.

A Moving Image Please note: This was screened in July 2018 Fiction, documentary and performance art meet and mingle in this colourful portrait of gentrification in Brixton. Recently selected for preservation by the BFI, this film contributes to a growing wealth of British filmmaking.  Find out more Reframing the Archives Season For those of you who work with, or are interested in archive film, look out for this strand of events and screenings designed to inspire and inform through practice based insights from leading event producers, curators and archivists.  Find out more Cinema Rediscovered 2018 Join us for the third edition of Cinema Rediscovered - a chance to discover some of the finest new digital restorations, contemporary classics and film print rarities from across the globe where they were meant to be experienced - on the big screen.  Find out more