Find out more
Found in: Cinema Rediscovered 2019
Starting out as a far more
Posted by:

A cautionary tale that has entered the public consciousness and cultural firmament, to watch Soylent Green (Sun 28 July, 14:00 at Curzon Cinema & Arts - Trip to Curzon leaving Watershed at 11:00) with modern eyes can almost touch on the absurd. A film set in the future (2022), that cannot visually escape the 1970s (when it was made), while narratively evoking the hard-boiled detective novels of 1940s and ‘50s. As with so much great science-fiction, the film says a lot about the era from which it emerged, specifically the point at which the optimism of post-war America was starting to sour after years of failure in Vietnam, while also being on the cusp of the Watergate scandal. Yet, much as the film is woven into dreams of what the future looked like in 1973, the social and environmental issues at the heart of the film have never felt more urgent, and the warning it sends are more troubling than ever before. As a viewer in 2019, the film constantly challenges us to ask how far we have come, how close we are to this bleak vision, and what we can do to stop this grim dystopia becoming reality. 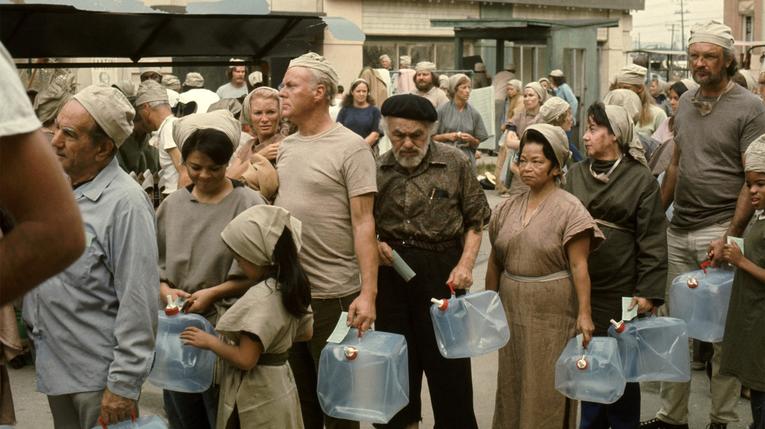 The seed of the story that would become Soylent Green was planted by satirist, illustrator and author Harry Harrison in a three-part serial titled Make Room, Make Room, written for the science-fiction magazine Impulse in 1966. While the theory that population growth is fated to outstrip our resources dates back to at least the late 18thcentury, and the writings of Thomas Robert Malthus, this worry had not been widely explored in either literature or the arts. Working in the burgeoning field of science-fiction magazines, Harrison saw the potential in a story built around the dangers of rampant over-population. The road from idea to publication was a long one, and Harrison spent eight years researching what materials he could find on the subjects of pollution, population growth and the notion of the Malthusian catastrophe.

Taking place in the last year of the 20th century, the setting is a New York fit to burst with a population of 35 million, crammed into every nook and cranny of the city, where most struggle to find space, water and food to survive. To counteract the ageing population, workers are obliged by law to retire at 65, and many pensioners regularly riot against a state that can’t support them. Resource shortages are rife; queuing for water and food is a fact of life, and one of the most sought-after foodstuffs is a vegan ‘steak’ made from a combination of lentils and soy, widely marketed as a soylent steak. The book ends at the strike of midnight, entering the new millennium, when the census proudly announces a new milestone, with US population reaching 344 million. (To return to the real world for a moment, the United States Census Bureau estimates US population at 327.2 million people as of 2018.) 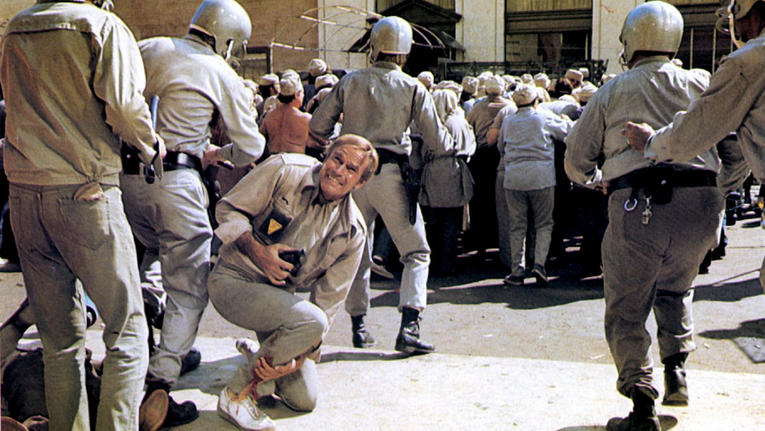 Harrison himself has stated that his aim was to set his novel in the near-future, the emphasis being on a world that was close to ours, albeit different and, as such, he avoided fantastical devices and technologies that so often peppered sci-fi stories of the time. His goal was to extrapolate from the situation as he saw it in 1966, and to set a drama within that world that was compelling and engaging. In this regard, he was successful, and the three-part serial was quickly released as a standalone book in the UK and US later in 1966. As is so often the case, the book was optioned for adaptation into a film but, in a cruel twist, Harrison was completely blocked from all involvement in production of what would eventually become the film Soylent Green. While many key elements of the source material survived into the film, it is important to note that perhaps the biggest twist in the whole film is completely absent from Harrison’s novel, and beyond the aforementioned soy-lentil steaks, there is no mention of Soylent, let alone any of the green, red or yellow variety. 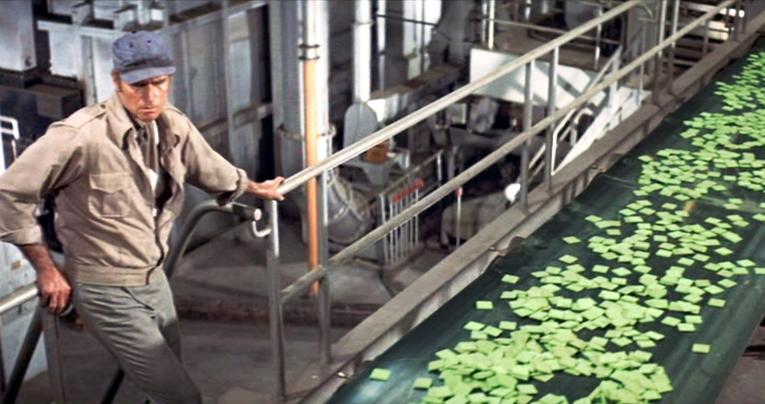 Having already starred in one of the biggest science-fiction franchise smashes of the late ‘60s / early ‘70s, with the first two Planet of the Apes movies, the headlining star, Charlton Heston, had clearly seen the potential for provocative, grown-up sci-fi on the big screen. Having devoured Make Room, Make Room, during a trans-Atlantic flight, Heston chased up his agent to see if the rights were available for the film adaptation. Finding a home for the project with MGM, Heston later stated that his ambition was to make an ‘issues’ film, or a science-fiction film with a conscience. While screenplay writer Stanley R. Greenberg took many liberties with the story, adding a sleazy, almost exploitation film edge to the narrative, he ultimately brought the film closer to a conspiracy driven crime drama more than anything else. However, the sweaty, sticky, and insufferably overcrowded world that Harrison first conjured up remains front and centre in the film, and the undeniable tension and anxiety of this desperate future makes the film a vivid and unforgettable watch.

Trip to Curzon: Soylent Green Please note: This was screened in July 2019 Join us on a day trip to Curzon Cinema and Arts in Clevedon for a tour of one of the oldest running cinemas in the UK, followed by a screening of iconic sci- fi Soylent Green.  Find out more Gluttony, Decadence and Resistance Season Each of the films served up in this buffet of fear, oppression, desperation and desire hopes to activate its viewers into action.  Find out more Cinema Rediscovered 2019 Thu 25 - Sun 28 July 2019 Join us for the fourth edition of Cinema Rediscovered – a chance to discover some of the finest new digital restorations, contemporary classics and film print rarities from across the globe where they were meant to be experienced – on the big screen.  Find out more