The Tingler is the second of a decade long run of B Movies independently produced and directed by William Castle in the middle of the last century. It’s a gloriously silly fright flick, that concerns a obsessive pathologist (Vincent Price in full ham mode) who discovers a parasitic creature that grows at the base of the spine when the host is gripped by fear! The only way to stop this creature from killing you is to release the fear … by screaming.

Not a horrible idea, right? And that is perhaps the secret of Castle’s ongoing appeal. He’s a great ideas man, a marketeer… A kind of P.T Barnum for the B Movie crowd. A cinematic circus ring master, enticing his audience with the promise of thrills and fun despite obvious creative and budgetary limitations. In the grand American tradition, an elixir peddling, side-show salesman.

Castle’s ‘genius’ lay more in advertising and immersive gimmickry than in the actual creative process of filmmaking (more on that later) – but, as with The Tingler, the basic idea at the heart of any William Castle picture is generally a decent ‘elevator pitch’, a one sentence winner that draws a crowd with the expectation of thrills and fun and one of the reasons that Castle counts amongst his ardent fans some far more famous and accomplished film-makers - Robert Zemeckis (Back To The Future) and Joel Silver (Die Hard), John Waters (Polyester) and Joe Dante (Gremlins) are all huge admirers. 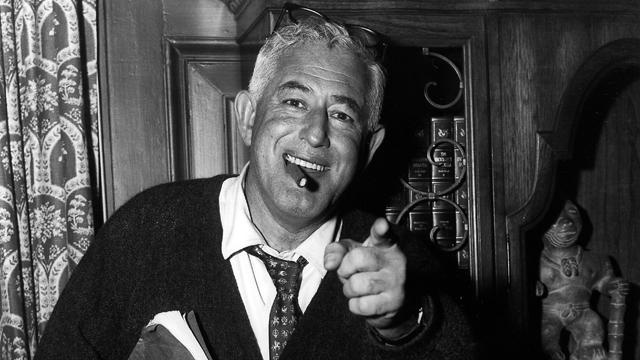 Born in 1914 in New York City, Castle left education at 15 years of age to take a job in theatre. He had become obsessed with a theatrical production of Dracula starring Bela Lugosi (that production being the basis for the 1931 Universal movie) and was captivated by the audience’s reaction to the piece - namely fainting and hysteria. The more reports that the production was too scary for the public to bare, the more tickets were sold.

- ‘I knew then what I wanted to do with my life – I wanted to scare the pants off audiences’ – William Castle.

His daily attendance at performances didn’t go unnoticed and, having become acquainted with Lugosi, it was Dracula himself who recommended Castle as a Stage Manager for the touring production of the play. Castle immediately dropped out of High School and dutifully hit the road!

He spent the next few years working a variety of jobs on Broadway, learning a particular set of skills which would prove invaluable when he later began to produce his own low budget movies: set building, design, direction and even a little acting.

As was often the case in the early Hollywood studio system, he was able to convert his experience in Theatre into a job in movies. At the age of 23, Castle went to work for Columbia Pictures where he once again worked his way up, eventually graduating to directing a significant portion of the company's B-Movie output.

All of which starts to paint a picture of the kind of man Castle was – self-made, a grafter and (and sometime grifter!) who had wisely used these formative years to gain an understanding of not only how to MAKE a movie, but how to make a movie profitable – a businessman more than a creative. A salesman first and filmmaker second perhaps?

While that’s certainly true to an extent, dig deeper and you’ll see that Castle’s career flirted with quality on a few occasions – he understood how to turn a profit on a limited budget and gained a solid reputation for being able to make movies under budget and at speed. This helped him catch the eye of Orson Welles who employed him as associate producer on his film The Lady From Shanghai (Castle also shot a lot of the second unit footage for that film).

Later in his career Castle purchased (using money raised from re-mortgaging his house) the rights to Ira Levin’s novel Rosemary’s Baby. Directing the screen adaptation of this huge, bestselling novel was a passion project for Castle but we’ll never know what his vision for the movie would have been. Having cut a deal with Paramount Pictures to release the film, they insisted on Roman Polanski directing … Castle still retains a producing credit on that film. 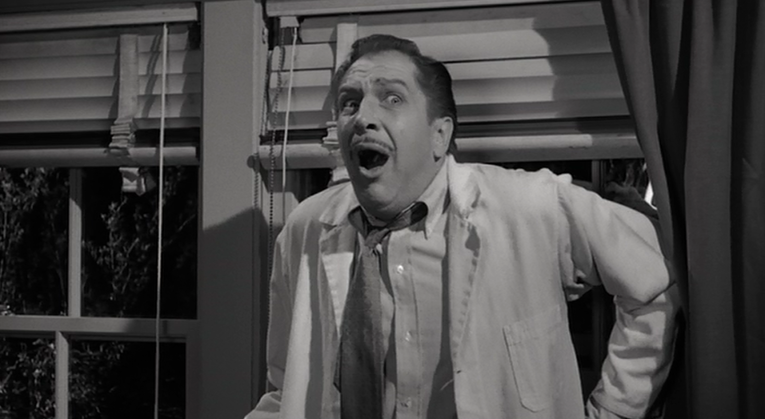 Ultimately however, he was happiest outside the mainstream, able to exercise control over his own projects, especially where the marketing of these movies was concerned. All of which brings us to the Tingler, celebrating its 60th birthday and an incredibly rare opportunity to see it cinemas this Halloween, exactly as Castle intended? Well, not exactly!

Yes, this slice of shlock is back on the big screen (go see it, you probably won’t have another chance), but not exactly as Castle would have wanted it… the original 1959 release of The Tingler is famous for one of Castle’s greatest ‘immersive’ marketing gimmicks: Percepto!

For the original screenings Castle had purchased a large shipment of surplus WW2 airplane wing de-icers which consisted largely of powerful vibrating motors. He employed a crew in the U.S to travel with the film from cinema to cinema where the crew would attach these ‘buzzer’ motors to the underside of some of the cinema seats.

During the finale of the film where onscreen Vincent Price would implore the audience to ‘SCREAM! SCREAM FOR YOUR LIVES’ when one of the parasitic Tinglers has supposedly escaped into the auditorium, hey-presto, the buzzers would be set off, sending vibrating shock waves up the spines of some of audience members and an instant audience participation and a cinematic shared experience was made that would send the public thrilled, excited and laughing nervously, into the night.

Whilst we can't promise such an electrifying experience at our own screening this Halloween you can still be still sure of a shock or two and whole lot of schlocky horror fun. And remember; in the words of Castle himself, ‘a scream at the right time may just save your life’! Happy Halloween.

Halloween Special: The Tingler Film
Please note: This was screened in Oct 2019 As this classic 50's frightener celebrates its 60th anniversary, join us for B-movie maestro William Castle’s weirdo masterpiece of gimmickry featuring a lobster-shaped monster that feeds on human fear - the perfect, spine-tingling offering for you this Halloween.  Find out more