"I felt the history right under my feet."

Madeline Anderson is a filmmaker especially gifted in the alchemy of shaping the past and distilling new meaning in the tensions inherent within memorialising bygone times. In her most well known works, Integration Report 1 (1960) and I Am Somebody (1970), screening as part of Come the Revolution Presents: Madeline Anderson (Fri 27 July, 11:00), her storytelling produces films that become meditations on time and healing; all the while reckoning with, and commemorating the tangled roots of history. She offers an examination on the anatomy of trust: how we should treat one another and the notion that humanity should never be a negotiation. Her films are an invitation to look at ceaseless injustice and ask how we can remake the world to make the best of us. 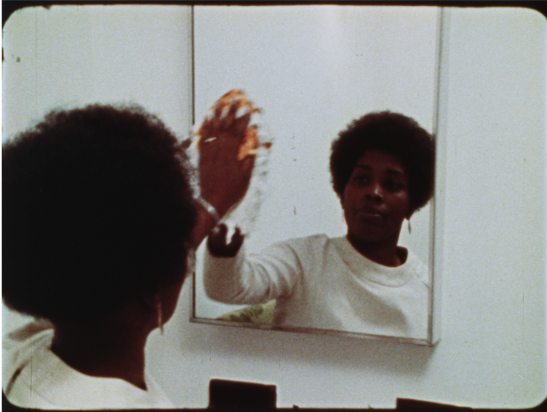 In her article Regarding the Pain of Others, Susan Sontag argues that if you are to have some space in which to live your own life, then it is desirable that “the account of specific injustices dissolve into a more general understanding that human beings everywhere do terrible things to one another,” but, in Anderson’s films, we see which truths rise to the surface in the construction of the specific. Her sustained advocacy of black people is (crucially) lensed with the gaze of the kinship she felt with the subjects in her film. The struggles she filmed during the Civil Rights Movement ran parallel to the obstacles she faced in pursuit of her own dreams as an American citizen, wife and black working mother. This humanistic approach to documenting and translating the plight of her fellow African-Americans formed the basis of her personal filmmaking philosophy. As Cinema Rediscovered celebrates Bazin 100, the centenary of influential film critic André Bazin (1918-1958), who challenged assumptions about film's relationship to wider culture through his eternally relevant question, Qu’est-ce que le cinéma? (What is Cinema?), one wonders what great exchange would manifest between these two deep thinkers. Anderson has three fundamental constituents that form the basis of her documentary practice:

They are principles similar to those adopted by the Third Cinema movement, a counter-hegemonic approach to filmmaking that aimed to produce socially realistic portrayals of life. While Anderson believes that film should have a social purpose, she also believes that, as an artist, you can still express everything you want through your technique and sensibility, but that just working as an artist is not as interesting as making the art useful. 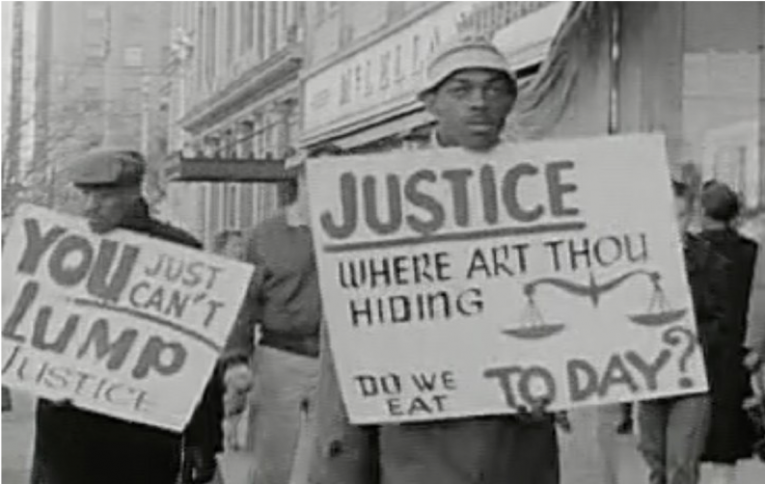 Integration Report 1 (1960) is Anderson’s first film and the genesis of how she devised her filmmaking methodology, organizing the foundational principles of her work. It is one of the first films to capture the sit-in movement that would spread across the Southern region of the US. From experience, she was aware that she would not get the funding necessary to make full length films and conceived methods to make low budget but effective work. She is the first African American woman to produce and direct a televised documentary and syndicated television series. To join the Film Editor’s union (essentially a father/son union) you had to be (with very few exceptions) male, white, have been working for eighteen months consecutively and be recommended directly by a male member of the union.

So she honed her skills on the margins in what was known as the ‘edit underground’, where filmmakers were in a vulnerable position, open to abuse and no pay. Anderson grew up in depression-era Pennsylvania in a neighbourhood far in the community’s periphery where there weren’t enough black children for the state to designate a segregated school for them so she was enrolled in an integrated school where ironically, she had a far better education than she would have otherwise. By chance, she took a babysitting job while at university for British documentary and Cinéma vérité pioneer Richard Leacock who supported her dream of becoming a filmmaker and helped her hone her skills. She went on to work with renowned experimental filmmaker Shirley Clarke on The Cool World (1963), a film about the alienation of black youth in Harlem. Following that, Anderson made her way to public television with Black Journal in New York City under the leadership of William Greaves before directing I Am Somebody in 1969. 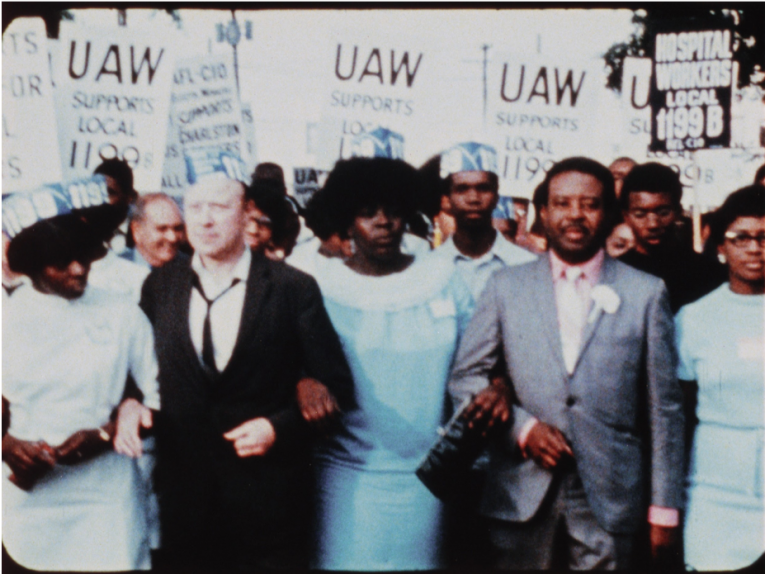 When we talk about national identity and belonging, more often than not, a shadow conversation about who can and can’t lay claim to being a “real citizen” is occuring. This ageless practice of discussing what constitutes the markings of citizenry is indicative of what activist Chip Ward alludes to as ailing us - the “tyranny of the quantifiable”. In I Am Somebody, Anderson offers an opportunity to reconsider the intersections of the layering that constructs our humanity and why these multiple intersections matter. It is the first contemporary documentary made by, for, and about black women workers and is her most personal film. The Charleston, South Carolina strike featured in the film was known as the “Union Power, Soul Power” campaign. 1199 is the largest healthcare union in the US and the strike constituted an important moment in the overall goal to nationalize its campaigns. Anderson was commission to make the film by Moe Foner, who served as the head of New York Local 1199’s educational and publicity campaigns. As with most of her films, she used archive footage with footage she filmed herself and quilted a powerful rendition of resistance. The strike marked the last large coalition between the labour movement, civil rights movement and fight for unions.

As Cinema Rediscovered looks at depictions of working class life and history with the Workers Unite! focus,I Am Somebody stands out as a documentary that would exceed its function as document, thus unfolding the discernment between the women in the film, tethering their wholeness together with a representation of their moment in history. By filmically placing these women at the heart and centering them in this 1969 labour campaign, this work became a radical political act of recognition. One of the 400 strikers, Claire Brown, who provides the voice-over in the film, was a mother of five and an obstetrics technician at Medical County Hospital. Brown represented both the specific political assertions of Charleston’s black female population and Anderson’s desire to make the film truly about the these female strikers’ desire to be recognized as human first above all. 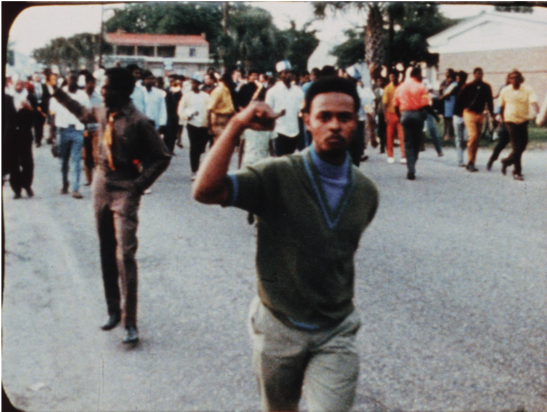 I Am Somebody captures rare footage of civil rights leaders like Reverend Abernathy, Andrew Young and Coretta Scott King with the latter speaking directly and poignantly of the particular political location of black women workers. King’s relationship with 1199 built on her husband’s long commitment to the union (having founded the Southern Christian Leadership Conference) before his murder less than a year before the Charleston strike. The circuits of visibility particular to the African American population of the US is examined in specific politics of redistribution when Young proclaims that the only colour the oppressors see is green. The power of the dollar bears fruit for the strike when the economy of Charleston is hit hard when their black residents do not spend. The hospital administrations’ attempts at depoliticizing the strike make evident that the demand for remedies beyond just wage increase is vital. This desire for a collective humane recognition is emphasised time and time again by Anderson’s use of the sonic landscape in the film. Determined proclamations for rights of personhood are cried over and over “I AM? SOMEBODY!” and “Union Power, SOUL POWER!”

The film’s unambiguously gendered perspective at the nexus of race and class redefined the demand for human recognition and provided an antidote to pervasive dehumanization making the film - tragically still - all too relevant today. Anderson’s rigorous inquiries into the human condition provide an eternal reminder for us to stop differing each others’ humanity in pursuit of our own nefarious vagaries.

Come the Revolution Presents: Madeline Anderson (Fri 27 July, 11:00) screens as part of Cinema Rediscovered, with Ngozi Onwurah's And Still I Rise, and will be introduced by curator and writer Liz Chege.

Come The Revolution Presents: Madeline Anderson Please note: This was screened in July 2018 A shorts programme of the work of Madeline Anderson, the first African-American woman to executive-produce a nationally aired television series.  Find out more Women on the Periphery Season Locating complex identities and searching for their place in a world that wasn’t always ready for them, this strand celebrates brave, bold, funny and warm storytelling from and about extraordinary women.  Find out more Cinema Rediscovered 2018 Join us for the third edition of Cinema Rediscovered - a chance to discover some of the finest new digital restorations, contemporary classics and film print rarities from across the globe where they were meant to be experienced - on the big screen.  Find out more