On being asked when he first came across the story, Bart Layton recalled reading about it in an article in Vanity Fair. "I was on a plane back to the UK after a film festival," he said. Then he paused and told us that this detail may not be entirely accurate, “That’s the thing about memory. . .” he mused, letting the ellipsis speak for the inherent unrealiability of all narrators - himself included.

Layton - who studied at the University of Bristol - is a filmmaker with a background in documentary and American Animals (Fri 7 - Thu 13 Sep) is his equal parts surprising and exhilarating follow up feature to highly-acclaimed documentary debut, The Imposter (2012). For Layton, uncertainty is just par for the course. On visiting Watershed for a special preview and Q&A last week, the young master of truth and manipulation was nothing but candid.

The story that Layton recalls reading in Vanity Fair (which may or may not be this article, republished online from the December 2007 print journal) , is of four well to do and, by all accounts, happy, healthy and decidedly privileged white male college students who embarked upon an ill-advised (and ill-planned) book heist. Yep, that's right, book heist. Somehow deciding that rare books from the Special Collections Library at Transylvania University would be easier to swipe and flog, four unwitting boys attempted to steal more than five million dollars' worth in books. The plot itself sounds so unlikely that it not only beggars belief but, without the intercut real-life interviews, almost seems made-up, which is why Layton, who had proved himself as a filmmaker of worth with The Imposter, was the perfect fit for its (re)telling. 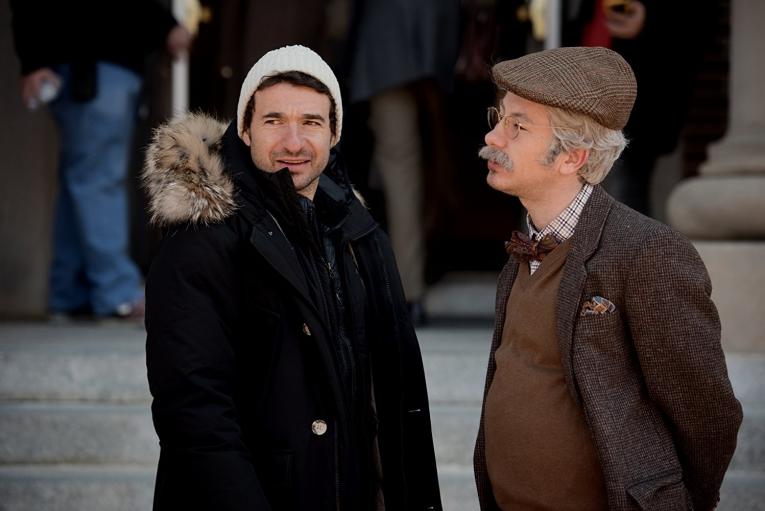 Pictured: Bart Layton and Barry Keoghan on the set of American Animals.

While we as viewers couldn't help but puzzle over how the film was made and how much of it was scripted versus how much confessed from the real-life criminals, Layton told us that he didn't concern himself with whatever labels or categories anyone wanted to put on it. What he did care about was having a film that had the spirit of truth and a truthful approach. Tired of seeing made up movies with an end credit sequence that revealed little more than lookalike casting via real life photographs, Layton didn't want to make a movie 'based on a true story',  he wanted made one that 'is a true story.'

That's why, after reading the article in Vanity Fair, his first move was to write to Warren Lipka, Spencer Reinhard, Eric Borsuk and Charles "Chas" Allen II, who were, at the time, still serving their seven-year sentences in prison. After striking up a rapport and reading their replies, each of them revealing misguided motivations and a clear remorse for their crime, Layton knew had landed four naturally compelling characters and a caper worthy of the big screen. 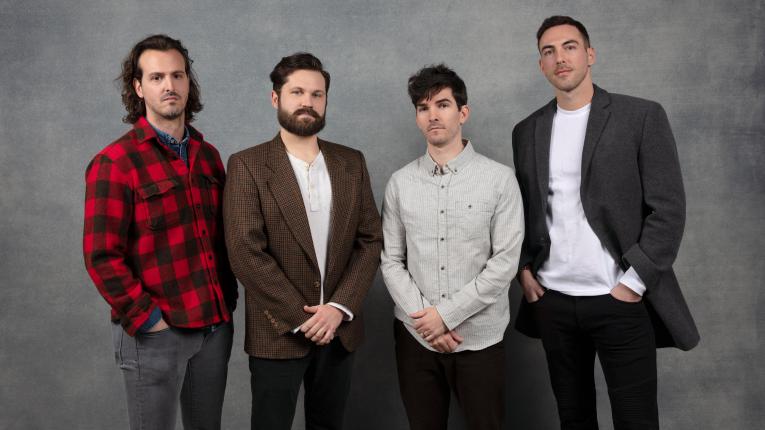 Once he had decided how to make the movie - blending documentary and drama - he had only to cast the dramatic complements to his real-life characters. He told us that he'd been offered his pick of the biggest names in the business for the age group of his four protagonists and, looking at the final line-up, he chose well: the film stars Barry Keoghan (Dunkirk, The Killing of a Sacred Deer), Evan Peters (American Horror Story, X-Men), Blake Jenner (Glee, Everybody Wants Some!) and Jared Abrahamson (Fear of the Walking Dead, Travelers).

But unlike a lot of movies that are 'based on true events', Layton revealed that he didn't want his actors fraternising with their real-life counterparts, and he refused to let them meet. This decision in his filmmaking process is absolutely key in understanding how well the actors were able to achieve what Layton called 'alchemy'. The actors seamlessly bring magic  to the dramatisation that works in high contrast with Layton's real-life interviews, which he also confirmed were not scripted and consist entirely of what the boys themselves wanted to say, speaking direct to camera.

Determined to get the tone right - and he absolutely nails it - Layton's carefully crafted sound design and selection of music in the film ensures his docu-dramatic hybrid beast hits all the right notes that a heist thriller ought, whilst continually reminding and regrounding the audience in the very real world from whence the story came. In addition to the beautiful music we hear in the film, Layton would also play music on set for his cast and crew to create the right atmosphere for certain scenes.

Even if Layton won't label it, I'd call American Animals a slick movie crafted with care and a deft hand, and a docu-dramedy like no other. When he left our building, we still had so many questions about the details from the lives of the well-educated, well-off boys who decided to commit so serious and seriously misguided a crime. But, having run out of time - we could have talked for hours - I keep circling back to his first remark, "That's the thing about memory. . ." For all of the howling laughs, roaring anger, squawking surprise and purrfect tone that the film provides, there will forever remain a lingering uncertainty thanks to a loveable and unforgettable herd of unreliable narrators: Lipka, Reinhard, Borsuk and Allen, Keoghan, Peters, Jenner and Abrahamson and even Bart Layton.

American Animals Please note: This was screened in Sept 2018 The heist film is turned inside out in this wildly entertaining true-life tale focuses on four dimwitted college friends who, inspired by their favourite movies, hatch a scheme to steal a multi-million dollar book collection.  Find out more Conversations about Cinema We think cinema is the start of a conversation. Talking to you at our Box Office, in the Café & Bar, before and after the films, online on social media, and reading your comments on our noticeboard deeply enriches the way we all understand the films we’re watching.  Find out more