It’s almost an hour into Mike Hodges’ 1999 feature film Croupier (Sat 27 July, 16:20) when the protagonist, Jack (played superbly by Clive Owen) and Jani (Alex Kingston) find themselves at a house party, playing cards with the other guests - although Jack is in fact, “just observing”. As the camera slowly pans from one side of the table to the other and, as it seamlessly continues to move from left to right and right to left, it shows the guests as they play the game, and the pile of money that is at stake – and Jack, who is perfectly poised in the middle of the shot, just watching. Both the shot and the game take just over two minutes and serve as a masterclass of movement, composition and timing, a credit to Hodges and his crew; a perfect yet simple cinematic feat.

It is, then, a classic example of why, when it comes to the work of Mike Hodges, that it’s worth keeping an eye on the staging in his films. Both Croupier and Black Rainbow (Sat 27 July, 23:20), screening as part of our celebration of Bristol UNESCO City of Film at Cinema Rediscovered this year, are celebrating anniversaries (twenty and thirty years respectively) and, though they are very different films thematically, they both showcase Hodges’ keen eye for detail. The devil is in the detail, after all.

In Black Rainbow, Hodges transports us to the religious houses of both the Northern and Southern states of Carolina. These ‘churches’, which should be full of light and celebration, infused with ‘heavenly thoughts’ and ‘the joys of life’ are actually dark, depressing and steeped in death. This is the world that Rosanna Arquette’s clairvoyant Martha Travi finds herself in and is unable to escape. 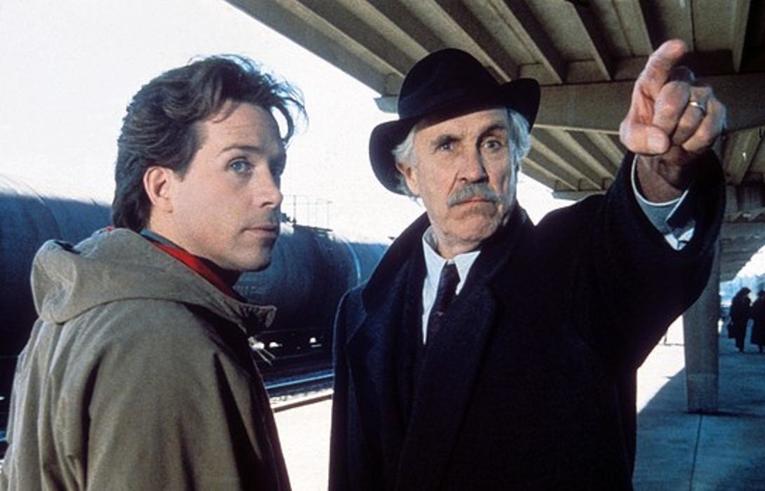 Whether it is spiritual or physical, the world we see forming around Martha and her father, Walter (Jason Robards, but very nearly performed by Burt Lancaster) and journalist Gary Wallace (Tom Hulce) is beginning to close in. Everything that civilisation offers is at stake, whether that’s a train, car, hotel or even a church. Even the natural world is taking control and closing in on mankind – an extension of Hodges’ nod to the discovery of the Kudzu weed from the film’s opening scene. Black Rainbow is full of darkness and unnatural outcomes, a perfect setting for one of Hodges’ most underrated thrillers. The film is a classic example of Hodges’ use of detail, especially in its approach to a conservative American landscape.

Ten years on, Hodges crafted another unnatural world but, this time, far from the almost rural townships of Carolina we find ourselves in and under the urban streets of central London. Croupier’s London may not be instantly recognisable. Harking back to Hodges’ first major film, Get Carter, and its titular, iconic character, Jack Carter (Micael Caine), the world that surrounds Jack the croupier is also a dark, isolated and unnatural place. It is a world of strange lighting and, when we do actually see sunshine, it is from behind the barred windows of Jack’s basement flat, itself lit by lamps and fluorescent lighting.

But Jack’s world is also one of options and chances; a world where every second counts towards whether you win or lose. The casino in Croupier – a set built in a German studio in Monheim – is also one of reflections, doubles and mirrors. And though Jack carefully observes and tries manipulate it to his advantage, it becomes a place that threatens to split him in two.

Since his celebrated debut with Get Carter, Hodges has continued to show us an alternative view of the towns, cities and countryside we live in. But these cinematic world’s may not be so different to our own. In many ways, the detail found across Hodges’ body of work highlights the sinister societies we now find ourselves in, whether that be in the UK, US or even on planet Mongo (Flash Gordon). Hodges offers us the chance to stop, look and think about the world around us, and consider where we should go from here.

Croupier + Q&A with Mike Hodges Please note: This was screened in July 2019 Join Bristol-born director Mike Hodges for a 20th anniversary screening of his sophisticated noir thriller, starring Clive Owen as a croupier who gets sucked into the world of a corrupt casino.  Find out more Black Rainbow Please note: This was screened in July 2019 Mike Hodges directs this thriller starring Roseanna Arquette as a spiritualist who becomes a disembodied witness to a brutal killing.  Find out more Bristol UNESCO City of Film Season The fourth edition of Cinema Rediscovered celebrates Bristol's status as UNESCO City of Film, a global recognition of the city's outstanding contribution to film culture.  Find out more Cinema Rediscovered 2019 Join us for the fourth edition of Cinema Rediscovered – a chance to discover some of the finest new digital restorations, contemporary classics and film print rarities from across the globe where they were meant to be experienced – on the big screen.  Find out more