Find out more
Found in: Cinema Rediscovered 2019
Posted by:

If Ronald Reagan’s landslide Presidential re-election victory in 1984 came as an emphatic popular endorsement of his neoliberal economic philosophy, then it was not without its malcontents in the cultural sphere. Even before Oliver Stone’s Wall Street and Tom Wolfe’s The Bonfire of the Vanities, both of which appeared at the apogee of the Reagan-Bush axis in 1987, the cinematic vanguard had already produced its own responses to the Gordon Gekko “Greed is Good” generation, whether that be; yuppies indulging mid-life crises aboard their Winnebago (Lost in America), stranded in a Kafka-esque Greenwich Village nightmare (After Hours), or imprudently traversing the American East Coast with bob-haired free-spirits named Lulu (Something Wild). 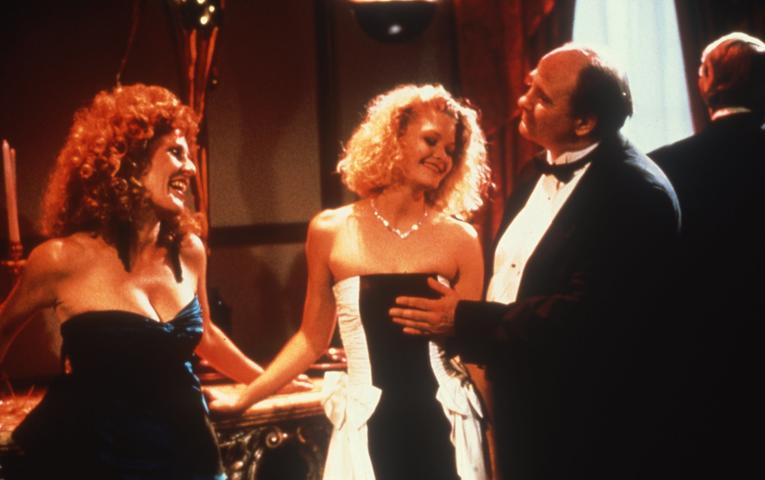 While each of these examples pictured the open road or, in the case of After Hours, simply the other end of Manhattan, as an exotic escape from the materialistic excesses of the new economichaut monde, Brian Yuzna’s scabrous directorial debut Society (Fri 26 July, 20:30) offered a different flavour of satire — a suburban teen nightmare located within the confines of the family home. Set in a wealthy Beverly Hills milieu, we are introduced to Bill, a high school student who seems to enjoy all the superficial trappings of jock perfection: he’s on the basketball team, he cruises around in his SUV, and his popularity at school is such that he can seemingly sleepwalk into becoming elected class president.

However, as the film’s sinister prologue makes clear, the surface sheen of Bill’s lifestyle only thinly masks his deep insecurities about himself and his sense of alienation from the rest of his high society family, not to mention his harbouring of some particularly inappropriate feelings towards his prom princess sister. Such disaffection might be written off as a kind of affluenzic quarter-life angst, but his paranoia is further stoked by the discovery of an audio recording of what sounds like his nearest and dearest engaging in some form of violent orgiastic ritual, leading him on a pathway to try and uncover the very discreet charms of his particular strand of the bourgeoisie. 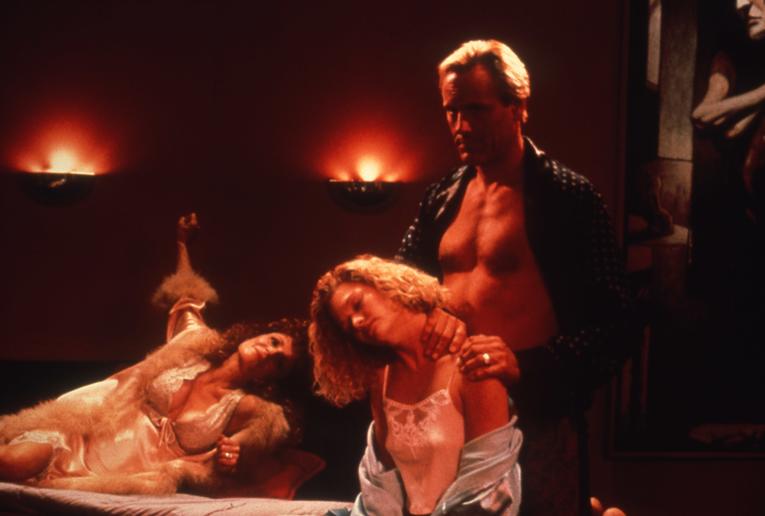 If the likes of Halloween and Poltergeist had used drab visions of suburbia as the familiar, quotidian backdrops for sinister goings-on, then Society shares more in common with David Lynch’s Blue Velvet or Bob Balaban’s Parents in presenting an exaggeratedly pristine picket-fenced idyll as the very crucible of the venal: less the banality of evil than the evil that flourishes behind the facade of banality. The banality here is Bill’s family’s lifestyle, a comedic riff on the lavish excess of ’80s soap opera staples Dallas and Dynasty with their big mansions, big egos, and even bigger hairdos.

Yuzna had initially made his name as the producer of Re-Animator and From Beyond, two extra-lean H.P. Lovecraft adaptations directed by his friend Stuart Gordon, but while sharing Gordon’s taste for the lascivious, he would draw from a different pool of inspirations for his own directorial debut. He cited both Robert Siodmak’s noir chiller The Spiral Staircase and Roman Polański’s Rosemary’s Baby as his key influences, and structurally the film certainly owes much to the latter. Polański’s paranoiac work more generally feels the touchstone here — witness the film’s numerous visual nods to Chinatown, which serve to flag up some not immediately obvious thematic overlaps with the Pole’s oeuvre. 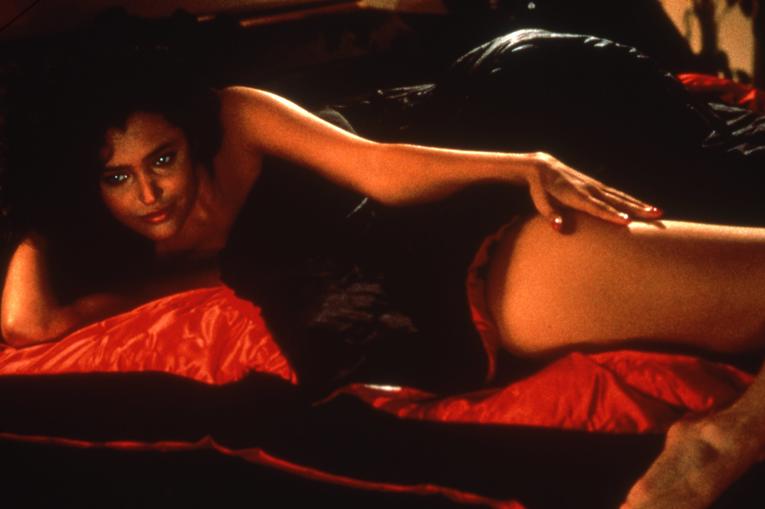 As with Chinatown, Society upends the visual conventions of its genre with its emphasis on the bright sunshine of its Southern Californian setting, at times more closely resembling a Brat Pack teen comedy than a horror film. That is, of course, until the infamous “shunting” sequence in the film’s lengthy denouement, with its wantonly stomach-churning effects provided by Japanese effects maestro Screaming Mad George. He and Yuzna shared a common passion for the work of Salvador Dalí, though the fleshy grotesquery suggests a wider parentage stretching from David Cronenberg back to Hieronymus Bosch.

In Yuzna’s vision, the rituals which both delineate and perpetuate walled-off social hierarchies —cocktail parties, debutante balls — become a very different and more macabre ritual, in which the ultra-rich very literally feed off those lower down the economic ladder, a parasitical dynamic echoing that contained in John Carpenter’s similarly themed They Live. All of this is given a curious extra charge for British audiences by the film’s title theme, a reworded version of the traditional Eton Boating Song, carrying with it (intentionally or not) associations with class exclusivity and aristocratic privilege. 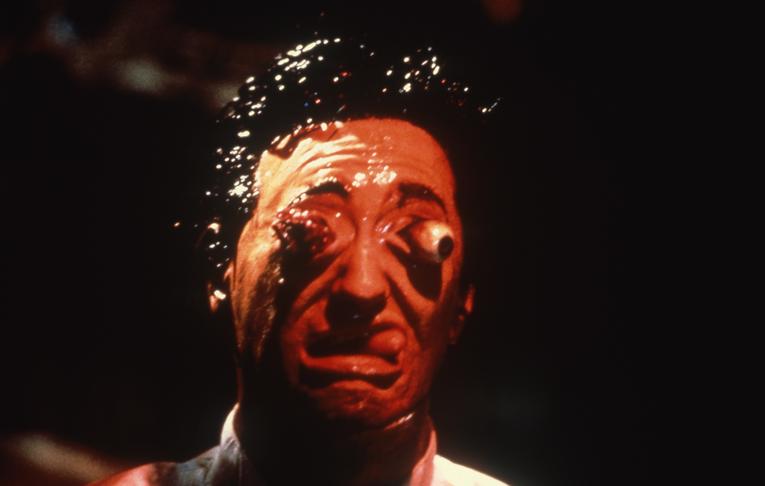 It would indeed be in the U.K. where Society would enjoy its initial cult success, perhaps unsurprisingly in a country where punching up the social order has long been less an affront to decency than a kind of moral obligation. Nervous-stomached American distributors, however, held back from releasing the film for three years, by which time the Reaganomic boom was already long gone. Thirty years on, one suspects an Occupy generation more skeptical about capitalism’s wealthy victors will have fewer qualms about viewing the now 1% in such an unflattering light. It’s just like Uncle Charlie told us in Shadow of a Doubt: “Do you know if you rip the fronts off houses you'd find swine?”

Society screens in the Videodrome at 20th Century Flicks as part of Cinema Rediscovered.

Society Please note: This was screened in July 2019 From Brian Yuzna, the filmmaker behind Re-Animator, comes yet another gross out B-movie, but this time it's dripping with salty satire. Shelved for three years after its debut on the festival circuit, first at Cannes, the film finally gained a US theatrical release in 1992.  Find out more Gluttony, Decadence and Resistance Season Each of the films served up in this buffet of fear, oppression, desperation and desire hopes to activate its viewers into action.  Find out more Cinema Rediscovered 2019 Thu 25 - Sun 28 July 2019 Join us for the fourth edition of Cinema Rediscovered – a chance to discover some of the finest new digital restorations, contemporary classics and film print rarities from across the globe where they were meant to be experienced – on the big screen.  Find out more