This 360 drama app was created by Play Nicely with me, to help Nursing students understand the signs of mental illness in patients.

Hazel is a writer currently developing a live show, which began as the VR film We Sing In Fire & Blood. With 30 yrs in the biz, mixing digital with real world, she's used a wide variety of media including robots & smell!

Finally I can announce a 360 drama I wrote in 2016 with Play Nicely for City University of London.

This interactive drama app for use with Samsung Gear was created as a teaching aid for Nursing students: to promote discussions around recognising and understanding the signs of mental illness in patients. The conditions  represented are:  anxiety, depression, mania and psychosis. 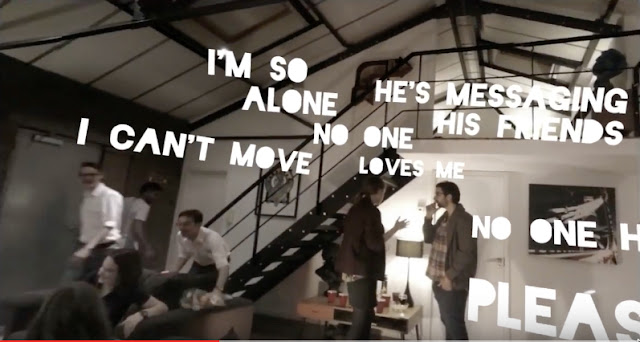 Depression: experienced as a 360 drama for Samsung Gear, created as a teaching aid for student Nurses at City University of London.

The drama has four chapters, each chapter a different variation on an everyday social event, a house party. The 360 drama is experienced from the point of view of a guest, who is a person with a mental health condition. Each of these conditions have their own particular set of symptoms. They are presented in the drama with 'thoughts' appearing as text on screen, with changes to the colour and sound adding to the sensations. All of this is a way of allowing the user to feel as if they are very much inside the head of the person with the condition.

Technically what happens is that the scene is filmed using a 360 camera that is fixed in one spot, meaning that the person, i.e. you, don't move or interact directly with anyone in the film but you look and listen to everything that is going on around you. The films are played on a smart phone inside the Samsung Gear headset, worn with headphones. Wearing the headset and headphones you naturally move your head around to look at the room and listen to conversations. On top of that you see your 'thoughts' appearing in mid air and you hear the 'voices' in your head.

Before we began scripting the drama, the Play Nicely team and myself went to City University and met with staff, students and patients. This was an extremely enlightening discussion due to the willingness of the patients (ex-patients) to share their stories very openly. What they described very much influenced my writing, particularly their descriptions of psychosis (schizophrenia) and mania. The words that appear on screen, for those two conditions particularly, were influenced by the stories they told us that day. It had never fully occurred to me just how much of a harrowing illness schizophrenia is until staff and an ex patient described the symptoms.  Having experienced anxiety and depression myself for much of my life I understand those conditions more fully. Symptoms of all four of the conditions are expressed through the text appearing on screen. Perhaps what's most effective of all however are the voices that can be heard during the psychosis chapter of the drama. This is one of the things that 360 and VR do very effectively. Actually binaural sound would work just as affectively by itself but the visual information, the film of the people at the party talking to each other and directly to you, give the context - the full meaning of what it might be like to experience these illnesses.

Back in the studio in Bristol, the Play Nicely team and I set about creating a spreadsheet on which we would organise all elements of the shooting and post production scripts. The exact same scene is used for each of the four conditions with audio-visual effects added afterwards for the different versions. 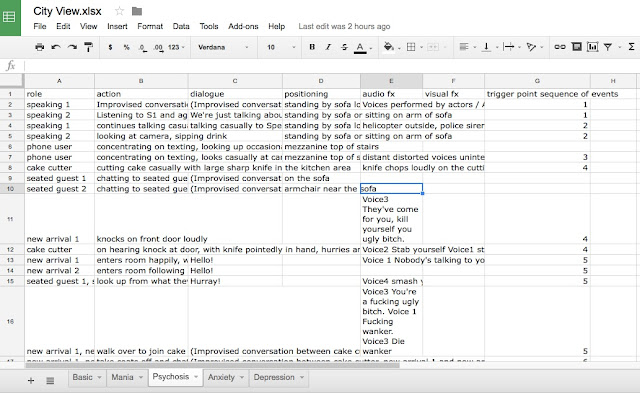 Scott Fletcher at Play Nicely and I worked together closely on how to best divide up the spreadsheet in order to create the most useful script possible. We were definitely innovating as we went along, figuring out how to create such a multi-purpose shooting script for a 'one-shot'. During this process it became obvious to me that I had to write it as a stage play. The scene is around two minutes in length and everything happens simultaneously. If we were shooting with a hand held camera moving around the room from one conversation to the next it could potentially be edited, time could be played with and close-ups used. However we aren't doing that, the camera is fixed and it sees everything in the room at once, hence it being more like a stage performance in front of a audience (the camera being the audience). There's no 'off camera' particularly in this case because the 360 camera is positioned against a wall: there's nowhere behind the camera for the crew to be out of shot. So I approached the script as a stage performance, where there is a general hubbub and attention being drawn around the stage as characters either enter or move down stage and also increase the volume of their dialogue. 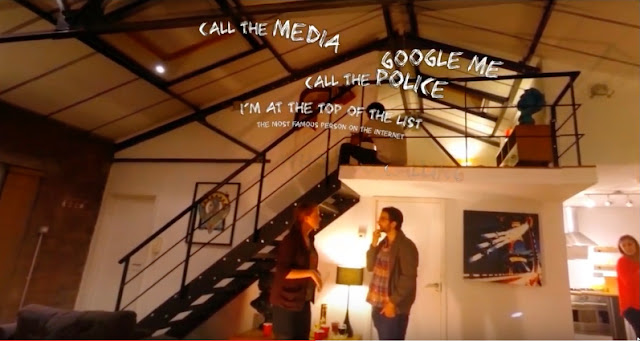 Mania: colours are heightened and text appears thick and fast to represent typical symptoms of euphoria experienced by people living with the condition.

Characterising mental illness as accurately as possible is obviously extremely important. I worked closely with the written notes and the audio recording we made during our discussion with City University staff and patients. For further research I met with a psychiatric nurse in Bristol who is a friend of our production manager. She was very helpful indeed, adding more stories about patients with psychosis and mania and describing typical speech patterns, mood changes and belief systems. I found it fascinating and awe-inspiring: it built my sympathy for those living with these conditions and with the NHS staff who help them manage their illness daily.

The feedback from City University teaching staff is that the 360 dramas have been very affective with Nursing students. I feel privileged and glad to have contributed to something so important and potentially life changing. At the same time I've been able to build my skills in writing innovatively for interactive digital platforms. 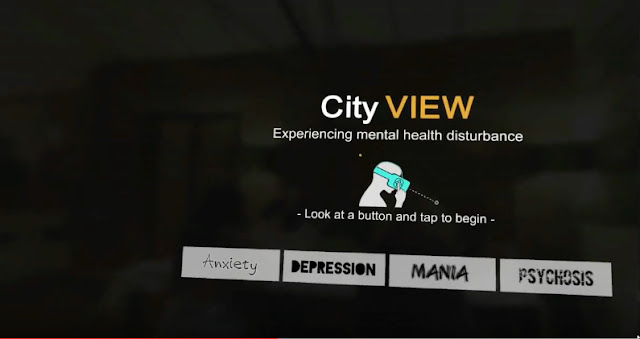 Stills courtesy of Paul Johnson, who also developed the app.

A Crash Course in Cloudspotting

We Sing In Fire And Blood

We love to work with creative people, companies and institutions from different industries around the world. Find out more about partnering with us to develop your big ideas.