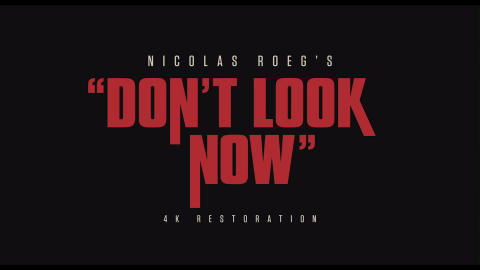 If ever evidence was to be presented for filmmaking as a unique art form then Roeg's masterpiece Don't Look Now, a film about love and grief wrapped up in a psychological thriller, could be used to mount the case.

Adapted from a Daphne Du Maurier short story, the film points to Roeg's growing interest in the otherworldly, the mysterious and co-incidence as well as his increasing ability to suspend plot and narrative through the choreography of editing. The opening sequence is perhaps the purest form of Roeg's visual storytelling sensibility. He lays out all the emotional and thematic elements of the film in a tour de force of cinematic expression with powerful emotional impact. The rest of the film resonating with the loss of the child and grief of the parents (Donald Sutherland and Julie Christie).

Don't Look Now holds in sublime balance the tenderness of a mature relationship - the celebrated love scene its emotional heart - stretched by the growing unease of a death foretold. An out of season Venice echoes the film itself: haunting and haunted, mysterious and timeless.