“Spiderman is the greatest superhero of all time” the Doctor states on the radio to inform people that she is indeed alive. A short sentence carefully crafted to resonate with an international audience whose mainstream film culture is dominated by superhero universes. Those few words illuminate how a conversation we often have in our society, especially amongst children, regarding many superheroes we see across our screens, is one that does not belong in the environment the Doctor is currently in, even though it is an environment of kids.

Panellist Rachel Randall points out that “children in conflict are the ones that often suffer the most.” This is reflected in the opening scene of the group of the young child soldiers - collectively named Monos - playing football blindfolded. In the metaphorical game of chess that is guerilla warfare, the group are being used as pawns; they are a line of defence and are disposable. Further to this, Randall remarks that this scene acts as a heterotopia. On the one hand, it mirrors society and the innocence of the youth. Yet, on the other, the anonymity surrounding their identity eludes to an eerie notion that what we are seeing is not quite a perfect depiction of our society. It is in fact a refracted representation, connected and yet dissociated from our world. 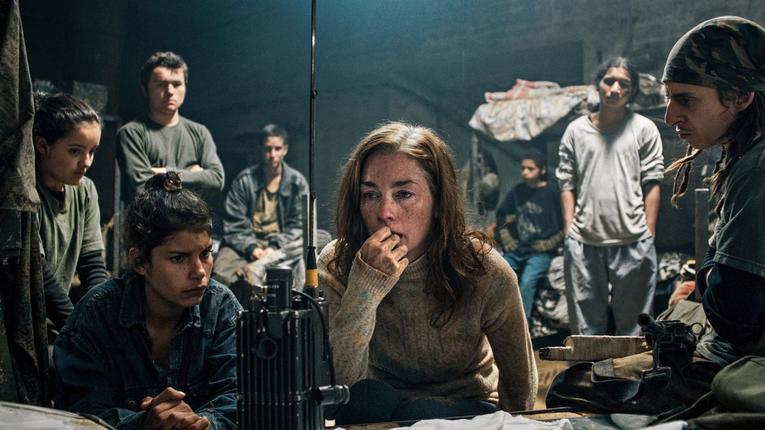 What emerged within the discussion is that although the director Alejandro Landes aims for us to connect with the characters, we do not know anyone’s real name. The prisoner is referred to as ‘Doctora’ and every member of Monos has a nickname. This creates an overall sense of anonymity, highlighting that these characters could be anyone. While this guerrilla group undoubtedly eludes to the conflict Colombia has experienced with FARC (Fuerzas Armadas Revolucionarias de Colombia/Revolutionary Armed Forces of Colombia), the lack specificity speaks to its universality. It reaches out to the Western world through the prisoner; it reaches out to parents and to young people through these characters being adolescents, and to a national audience through the Messenger being played by a former Colombian child soldier.

Landes uses cinema to unite the audience on a discourse of current world issues . Although panellist Humberto Perez-Blanco stated that the film is trying to be too universal in a setting too complex, I disagree. I believe Landes is trying to ensure that the audience can connect with the story on any level; so that they can feel that their voice is being heard. Which thus brings forth the beauty of the anonymity. It could be us. It could be you.

There are two realities existing simultaneously in this film; that of the guerrillas and the ‘real world’. These two realities are brought together when Bigfoot and Lady ambush the home of the family sheltering Rambo - who has deserted the group – and kill the parents and then the camera pans across to their children hiding underneath the table; vulnerable and alone. This act of killing brings home the reality in which Bigfoot and Lady exist. We are told that Bigfoot was raised by Messenger and therefore he may not know any other reality. He is vulnerable in his identity and succumbing to the animality within him, which is a play on ‘Monos’ meaning monkeys. Francesco Tava in the discussion stated that the characters are “totally detached from reality.” However, one could argue that they are detached from the reality in which we exist. As the civil conflict issues Colombia faces with FARC goes back to the 1960s, this is the only reality which these guerrillas know.

Monos is a beautifully crafted film that provides something for everyone to resonate with. While the film is surreal and complex, the intricacy of the cinematography mirrors the intricacy of the issues of life to which we can relate. Yet more specifically, issues that stem from the civil conflict in Colombia that feed into the heart of the country and the heart of its people.

Monos Please note: This was screened in Oct 2019 Chaos reigns amongst a wild troupe of teenage bandits who have rituals, guns and a panic stricken hostage in this tense and deeply unhinged thriller from Colombian filmmaker Alejandro Landes.  Find out more Conversations about Cinema We think cinema is the start of a conversation. Talking to you at our Box Office, in the Café & Bar, before and after the films, online on social media, and reading your comments on our noticeboard deeply enriches the way we all understand the films we’re watching.  Find out more