Read more
Found in: What we do
Illustration by Jasmine Thompson, Rife Content Creator From Curls to Coils: the Freedom of Choice
Posted by:

“more than anything, my time at Rife has opened up a world of opportunities” Jasmine Thompson, Rife Content Creator

Rife - our young people's platform was a highlight across the organisation - but particularly for those working with engagement. Nikesh Shukla, Vanessa Bellaar Spruijt  and Hannah Higginson all talked about the incredible response from Watershed and Rife Alumni - to the news that our Council funding was being cut. We remain determined that the future of Rife is as necessary and certain as when we started it...

"having worked with Bristol’s young people to create Rife, which has quickly become a national exemplar, we must seek to secure its future with and for our young people. Our position is one of determination, rather than defeat.”

Engagement Coordinator Roseanna Dias celebrated the joy and energy of the latest Rife Cohort - Imogen Downes, Alexie Segal and Euella Jackson. She also paid homage to the equally joyous collaboration with Drag Queen Story Time on storytelling events celebrating the imagination and fun of gender fluidity for all the family. 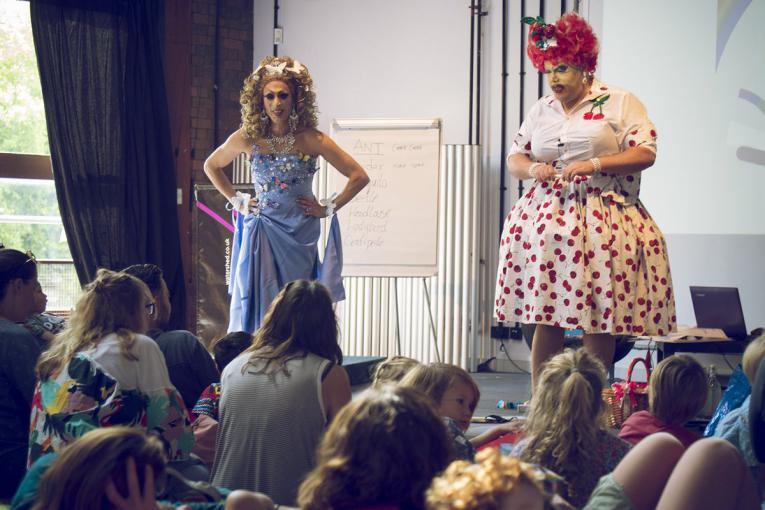 Nikesh Shukla, who will leave us during 2018 to focus full time on his writing (including launching the amazing Good Journal), added that the support from Watershed for his own artistic journey has played a significant part in his transition to a full time writer. Luckily for us he is also staying on as a resident of Pervasive Media Studio (and will continue to chair our inclusion group).

Lots of our creative programme is delivered outside the Watershed the building. Film Hub Coordinator Tiffany Holmes' 2017 highlight took place down in Cornwall - she chose On the Rocks at the Minack Theatre because "it was unique and exciting and really built our relationship with Compass, who do amazing work".  On the Rocks was an expanded cinema screening of Jamaica Inn at Minack Theatre in Cornwall, renowned for its iconic location perched on the cliffs above the Atlantic ocean.

The South West Film Hub also provided the context for Marketing Manager Alice Quigley's highlight: which happened as part of the Hub's New Release Strategy which puts extra communications energy behind independent films. In February Alice worked with Aisha Sanyang Meek on The Fits - creating events featuring boxing workshops and a flash mob dance display in Broadmead which brought this amazing film to new people and got Watershed into the centre of town. 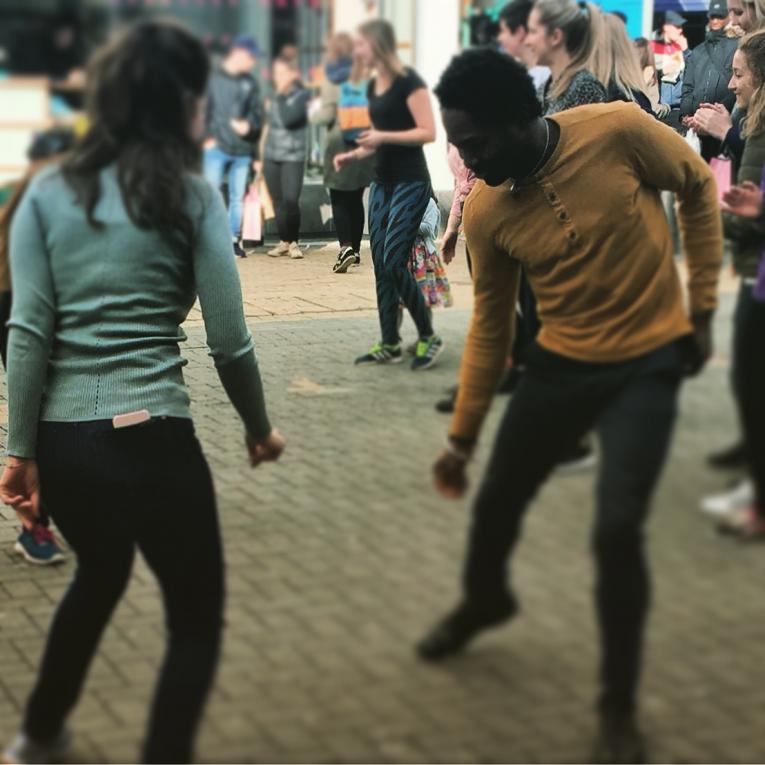 The work we have done around inclusion was also a significant highlight for many: 5G Programme Producer Vanessa Bellaar Spruijt cited the progress Zahra Ash-Harper has made in welcoming more black creatives into the Studio. Rachael Burton's highlight was BSL lessons - our work with Deaf audiences have impacted across the team, and Pete Vance talked about joining Watershed on the staff training day and being impressed by the time and energy put into things like Unconscious Bias training - signalling an organisation that takes welcoming everyone seriously. 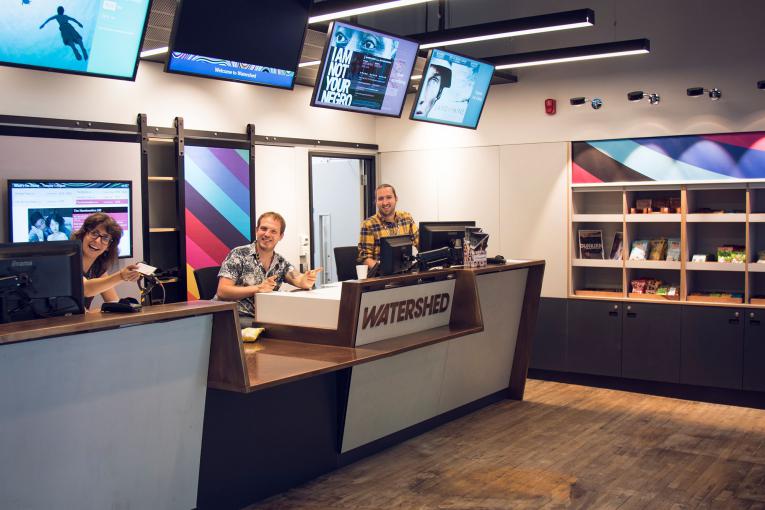 The customer facing parts of Watershed were also celebrated by Jo Kimber - who recently joined the Creative Team as Coordinator, though she has worked at Watershed as a Duty Manager for four years. Having recently undergone a restructure of our front of house teams this year, Jo described her highlight as the time and support people had been given (and of course the usher party which served as a kind of goodbye).

Claire Stewart, our Digital Communications Manager, shared her highlight, which was one Friday night in August. That particular evening we had three sold out events with very different audiences: one was a Satellite Q&A for An Inconvenient Sequel (a large eco/green crowd), one was a pop up food event with Matatu Kitchen (foodies and an East African audience) and the other was the first night of biopic Tom of Finland (which attracted two different gay fetish groups - UK Leather and Rubber Pride).

“It just re-iterated how we do a great job at attracting a huge range of audiences - seeing how comfortable they were hanging out together in the Café/Bar was a joy!"

How we work together is as important to our practice as as what we programme, Cinema Coordinator Clare Leczycki shared how new work flow systems (like Trello) have transformed our systems - streamlining the processes that surround how the films get from Mark Cosgrove's head to the cinema screen.

Verity McIntosh and Sookie Greene described the impact of the Pervasive Media Studio AGM - an annual event which gets all the residents together, Both shared how moving it was to hear the residents articulate the importance of studio culture, as well as their honesty about their own hopes and fears. Sookie followed up with the difference that the new mural by Jasmine Thompson has made to the space: 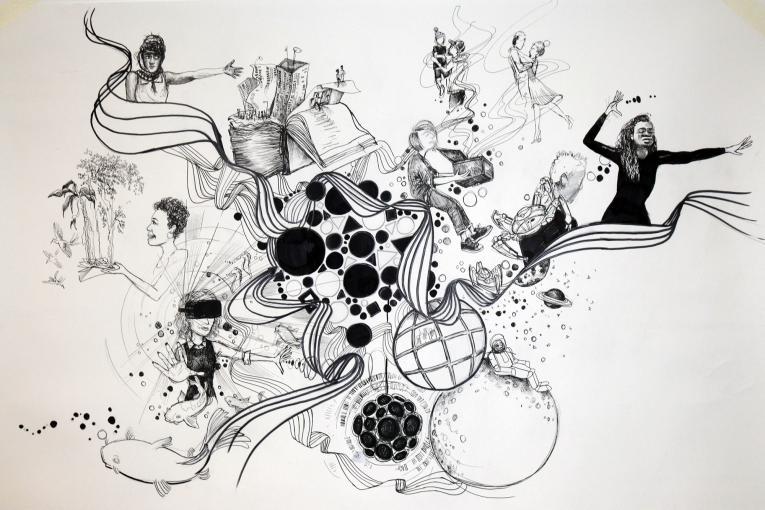 "one moment that stands out to me was when they reflected on how their week had been. There was such a sense of palpable trust and commitment, which felt like a product of all of Watershed and this building. That people came from all over the world, they had only been here for a week and could share that much of themselves, was amazing.”

David Redfern and Jo Bligh - Watershed's web team - celebrated letting go of DShed (our rather creaky digital exhibition space) and releasing 'What we Do", a new bit of our website which provides (for the first time!) a really clear description of the different parts of Watershed and allows for different staff voices to be heard.

Victoria Tillotson, who leads on artist residencies, shared the delight of watching the remarkable journeys that our brilliant studio residents (Sharon Clark, Chloe Meinech etc) have gone on to do. Cat John shared her enjoyment of reading Dancing on the Edge together and Bella Body (our newest member of staff) chose watching Norwegian Disaster film The Wave with her mum and brother (before she even worked here):

"it was the first time they have been to Watershed - it was packed and there was a real sense of shared experience within the cinema - it is why Watershed is my favourite cinema.  You don’t get it in a faceless multiplex…"

I find it almost impossible to choose one highlight of the Watershed year - but I am possibly most proud of our successful bid to Arts Council England for core funding. Rather than listing programme, we co-wrote a bid that foregrounded approach - in the form of care, open-ness, passion and responsibility - attributes that I believe makes Watershed pretty special.

As the bar and screens continue to be packed in the festive season (YAY!), the programme teams are also trying to grab a little break - because I have a feeling 2018 will be bigger and better than ever...

Our home What we do We occupy a historic Grade II listed building on Bristol's Harbourside.  Find out more